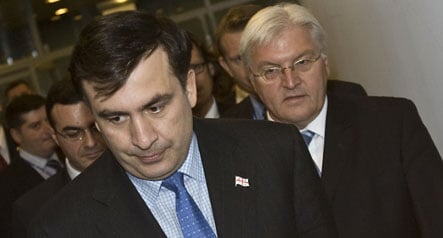 Steinmeier told reporters that US-Russian cooperation was essential not only to bring pressure to bear on Tehran but also to put out fires in many of the world’s other hot spots.

“I am very worried,” he told reporters on the sidelines of the United Nations General Assembly.

“I hope we can, in the medium-term, return to discussion forums we need because none of the international crises, from the Middle East to the Caucasus, Iran – we see it also in the six-party talks on North Korea, can be resolved if we do not have the two big players, Russia and the US, on board.”

Steinmeier said the US decision to pull out of a planned meeting of foreign ministers from the Group of Eight industrialized nations had led Russia on Tuesday to cancel its participation in the talks of the so-called 3+3 on Iran grouping the United States, Russia, China, France, Britain and Germany.

“We’re going in the wrong direction, I am completely convinced of that,” Steinmeier said of the deep chill between Washington and Moscow. The permanent five members of the UN Security Council plus Germany were to meet here Thursday to consider possible further sanctions against Iran over its contested nuclear programme.

In Moscow, the Russian Foreign Ministry said earlier that Moscow was against the planned meeting of the six powers, referring to US attempts to “punish” Moscow, apparently over its August 8 incursion into Georgia.

Steinmeier said the meeting had been especially urgent due to a recent report by the UN nuclear watchdog stating that Iran was not cooperating with its probe of its atomic program. He said discussions would nevertheless continue between political directors from the six countries on Iran but noted that Tehran would not feel the same pressure as when the six world powers stood united.

“I see our common chance in being able to demonstrate the international community’s decisiveness and unity to Iran,” he said. “That is difficult when we six are not speaking to each other. I see no more chance of that happening this week,” Steinmeier added, expressing hope

that the group’s foreign ministers could come together in the “coming months.”

The so-called 3+3 format was set up in the hope of convincing Tehran not to enrich uranium, amid fears Iran intends to build a nuclear bomb. Iran insists it is simply developing a civilian nuclear energy programme.