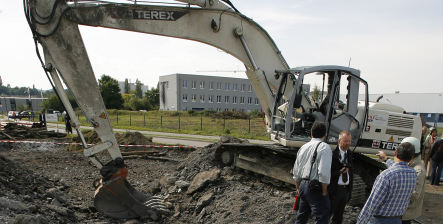 An excavator apparently drove over a 250-kilogramme (550 pound) American bomb, damaging surrounding buildings. Most of the injured suffered auditory trauma from the blast, and the excavator operator suffered injuries to his hands, police in the German state of North Rhine-Westphalia said.

“The hole was astoundingly small for such a large bomb full of so many explosives,” Armin Gebhard, head of the Arnsberg department for military ordnance removal, told The Local. “But of course it damaged all the surrounding buildings too. We are really happy it wasn’t worse.”

“Last year we cleaned up some 315 bombs that weighed more than 50 kilogrammes each, among other things,” Gebhard said. His district reports that it removed some 60,300 kilogrammes of old military ordnance in 2002 alone.

Another major ordnance find cropped up on the Baltic Sea coast this week when municipal workers spotted a four-metre long (12-foot) piece of a World War II-era torpedo near the Timmendorf beach.

“An accident this big hasn’t happened in our area for as long as I can remember,” Gebhard said.

But people are periodically killed when they stumble upon old war explosives around the country. In 1994, three construction workers were killed and eight bystanders injured when an unexpected bomb detonated, tearing through nearby buildings and cars in Berlin. In 2006, a road worker was killed near Frankfurt when his excavator hit a bomb.

With this in mind, state authorities offer – and in some cases require – that construction companies have their lots checked for ordnance. With the help of some 150,000 aerial photos taken by Allied forces during World War II, Gebhard’s department is able to assess the potential danger of a construction project.

“We are currently investigating whether the construction company involved in today’s accident had their site checked,” he told The Local.