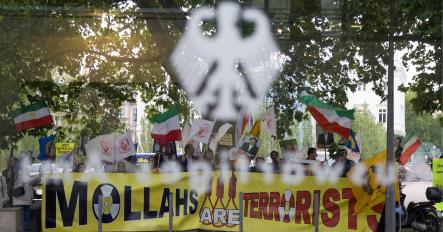 Protests in front of the Foreign Ministry on Monday. Photo: DPA

Frank-Walter Steinmeier urged Tehran to fully disclose its nuclear work to the UN nuclear watchdog, during a 90-minute meeting in Berlin on Monday with Manouchehr Mottaki, a diplomatic official said on condition of anonymity.

“Tehran must no longer stall for time but should rather regain lost trust,” the official said, describing the message Steinmeier gave Mottaki. “Steinmeier urgently called on the Iranian side to meet the demands of the international community.”

Steinmeier said the West hoped for Iran to adopt a more constructive stance in the dispute, warning that if it failed to do so, “it must expect further measures by the UN Security Council.” Germany belongs to the group of six world powers attempting to convince Iran to halt sensitive nuclear work with an incentives package in exchange for full suspension of uranium enrichment.

The Berlin meeting, which also touched on the crisis in the Caucasus and came at Mottaki’s request, occurred just hours after a report by the International Atomic Energy Agency that said that Iran had not frozen uranium enrichment activities as instructed by the United Nations. Such activities can be a key step in making nuclear weapons.

The IAEA also noted Iran had installed additional uranium-enriching centrifuges, and was testing more advanced centrifuges as well. The United States and other western nations fear Iran is trying to build a nuclear bomb, an accusation Tehran firmly rejects.