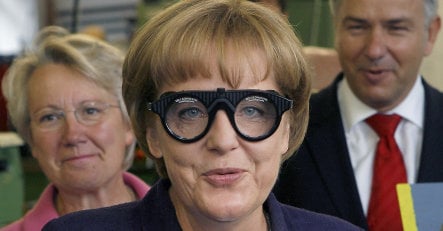 What kind of power does Chancellor Angela Merkel actually wield? There is an illusion abroad that Merkel is up there with the heavy-hitters because of her easy manner with the likes of George Bush, Nicolas Sarkozy and Vladimir Putin – all difficult men with dysfunctional relationships to power.

Her technique – to treat the men as if she were their tomboy sister – creates a public illusion that she is in control, that she has mastered the man’s power game. You can certainly quibble with the Forbes list. Condoleezza Rice was a distant seventh. Yet Rice is still the woman who will advise the American president on whether to push the button that launches a missile attack on Iran.

When Merkel presses a button the only thing that happens is that her neutered courtiers stand to attention. And now the Forbes list has become outdated only days after being published. If John McCain becomes US president in November, and if he slips in the shower, a 44-year-old moose-hunting former beauty queen named Sarah Palin gets to run the country. Angie can’t top that.

Perhaps the point of making Angela Merkel world champion is to honour her skill in castrating male rivals – at least that’s how it started out. Margaret Thatcher, who still ranks as the most successful female leader, kept women out of her cabinet, preferring men that she could dominate.

Angela Merkel has been more subtle. She has slowly but surely chipped away at the authority of her male critics and rivals. The glass ceiling was supposed to be broken not by brutal force but by feminine stealth.

She has, quite honestly, not done a great deal while in power. But she has at least managed to give the impression of dynamic leadership. Perhaps that is what impressed the Forbes judges two years ago when she was first declared to be the most powerful woman on the globe. And perhaps they have fallen into a deep hibernation since then. Because Angela Merkel’s power, never great, is beginning to crumble.

The Merkel Illusion has two components. The first – that she has huge talents as an international stateswoman – is based on the vacuum of power that opened up briefly in Europe and the world in 2006. Chirac, a lame duck. Blair and Bush, damaged by an unsuccessful war, both already thinking more in terms of their historical legacy than practical problem-solving. Russia, inward-looking as it tried to puzzle out what would happen after the Putin presidency.

Who else but Merkel could get the world talking again? Times have changed and to many outsiders, Merkel looks tired and often irrelevant. The United States is still playing only a marginal role in world affairs, but for the most part the vacuum has been filled. Sarkozy has taken over from Blair the role as the most exhibitionistic leader in Europe. Russia has solved its succession crisis by not really having one and is more assertive than ever.

And Merkel’s confidence on the world stage has been sapped by Foreign Minister Frank-Walter Steinmeier’s shadow policy-making on China and Russia. Two years ago the world would have hailed the bravery of a German chancellor meeting up with the Dalai Lama and risking the anger of Beijing. Now that rendezvous just looks silly, pointless self-publicity – and there is a German foreign minister who is openly saying as much. What kind of power is that? Merkel cannot present herself as the champion of German interests because there is no consensus about what those interests are.

And, of course, at home too Merkel is beginning to look like a scout leader who lost her map. There is no such thing as Merkonomics. Only the good luck of a global economic recovery, the inheritance of Schröder’s reforms that began to mature under her stewardship, and the dubious advantages of a radical increase in value added tax. All that has helped her balance the budget.

But Merkel never even attempted to step in the shoes of the Iron Lady. Her lack of reforming zeal destroys her credibility as a future Thatcherite chancellor. Who believes any more that Merkel will ever be a tax-cutting leader? Naturally, her junior coalition partners the Social Democrats are clipping her wings. But mainly her problem is that she has let herself become a prisoner of the industrial lobbies – the big car lobby that is sabotaging her climate change plans, the nuclear lobby, pharmaceutical lobby – and even the tobacco peddlers thwarting a total smoking ban.

Does she have the power to bring about real change in Germany? Not any more. Angie’s moment has passed. Her personal popularity is still high – perhaps that is what dazzled Forbes – but so is that of Queen Elizabeth. And they seem to be fulfilling similar functions: visiting kindergartens, making dinner speeches and attempting to stay out of dirty day to day politics. Thank God, Queen Angela does not have a son called Charles.