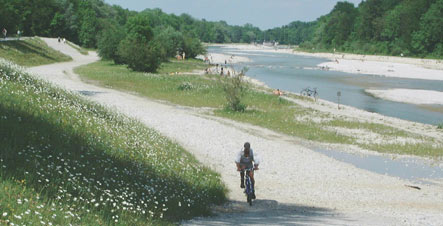 Anyone with a basic knowledge of pop culture would probably recognize the Los Angeles River. A battery of legendary movie scenes have been shot on its cement riverbed – the heady drag race in Grease, an epic face-off in Terminator 2: Judgement Day, and the famed Repo Man car chase, to name a few. But while the 50-mile storm drain may provide a memorable backdrop for drama, it’s not known for its sparkling riparian beauty.

PHOTO GALLERY: Click here to view photos of both rivers.

The river was once home to Steelhead trout and grizzly bears, but deadly floods caused the Army Corp of Engineers to corral the unruly watercourse in the 1930’s. With 80 percent of the river encased in cement, the river became a forgotten flood control channel good for little more than explosive Arnold Schwarzenegger scenes and industrial run-off.

But this October, the Terminator-turned-Governator will no longer be the only German-language influence on the washed-up waterway. The Goethe Institute, Germany’s international culture and language outreach organization, is planning to present the recent renaturation of Munich’s Isar River as an example to LA, where the city council adopted a 32-mile revitalization plan in 2007.

“They have an immense amount to do,” Ralf Wulf, head of the Munich building commission’s ongoing Isar River project told The Local.

Wulf and other Munich river experts will travel to LA in October to brief city officials on how the Bavarian city restored its river from a rigid flood control system to its former natural alpine beauty along eight miles through the city centre – bringing back wildlife and providing tranquil recreation spaces for urbanites.

“Our goal is to explain how they can begin and organize such a project, and to present the model as a stimulus,” Wulf said of the ‘Isar Goes Hollywood’ initiative, which has partnered with Friends of the Los Angeles River (FOLAR) to organize the public forum.

Motivating Californians to undertake such an intensive project might not be easy, though. Munich’s river restoration has taken €28 million ($42 million) and almost a decade, starting in 2000 after serious planning began in 1995.

The 295-kilometre Isar had also been ironed out and canalled to prevent heavy spring floods. But according to Wulf, it wasn’t as far gone as the LA River.

“I believe that their situation is very different than ours,” Wulf said. “The Isar was still relatively clean when we began, but that’s not the case in LA. They have different problems.”

Among climate and pollution differences, Margit Kleinman, program coordinator at the Goethe Institute in L.A., told The Local that water flow will be one of the major challenges to the potential project:

“It’s a different animal in L.A. The river has water only a few months a year,” she said. “Sometimes when it rains the water disappears into the ocean – it’s gone in two hours.”

Kleinman initiated the Munich-LA exchange this year when she asked Wulf to send pictures of the restored Isar River.

The photos showing the river winding along sandy banks and grassy picnic areas hugged by gravel bike paths were met with “great excitement” by LA city officials, Wulf said. He says the project, now beginning to extend outside the city, is internationally unique, drawing water management experts who come to observe from around the globe.

But such enthusiasm may be limited when the city of Los Angeles settles on a price tag for recreating a natural river setting.

“I don’t mean this in a negative way, but I’ve noticed a lot of the typical American questions of economics,” Wulf said. “They want to know how they will pay and what they will get out of it, but that didn’t happen in Munich – there was no question.”

The Isar River restoration was just part of a long-running flood management program, he said, adding that no one questioned the benefits of improving city aesthetics. Both aspects have been successful, Wulf said. City residents are relishing new recreation areas, and when major storm “Norbert” brought the biggest rainfall in 50 years in 2005, the Isar did not flood.

The Goethe Institute’s project coordinator Kleinman says she’s anxious to see what kind of impact the Isar project’s success will have on LA city officials in October, but isn’t sure they’ll be willing go to dig into their pocketbooks.

“Is the political will there? Yes, I think so,” she said. “Is the money there? Maybe, I don’t know.”