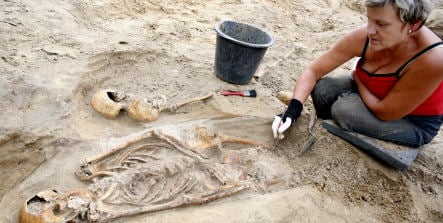 An archaeologist unearths a 14th-century skeleton in Berlin on Monday.Photo: DPA

The bones come from graves around the former Petrikirche, a church built 700 years ago in what was then known as the town of Cölln on Fisher Island in the Spree River and destroyed several times before being torn down after World War II.

The graveyard, near Schlossplatz in the central district of Mitte, is part of the city’s medieval heart, Regula Lüscher, building director for the city of Berlin, said on Monday. Lüscher said the ruins of the church should be made accessible for visitors.

Scientists are analyzing the bones to find out more about how Berlin’s medieval residents lived and then hope to find a location to rebury the remains. Many of the 2,000 graves contained more than one skeleton, archaeologist Claudia Melischs said.

City officials hope to incorporate the archaeological dig into plans for new buildings on the site and want to install so-called “archaeological windows” at several locations to allow visitors a glimpse of Berlin’s history.

The last version of the Petrikirche was finished in 1852 after plans by architect Johann Heinrich Starck, who also designed the Victory Column in Berlin’s central Tiergarten park. Church officials protested plans to destroy the building after World War II left it with severe damage, but were unsuccessful. It was torn down between 1960 and 1964.