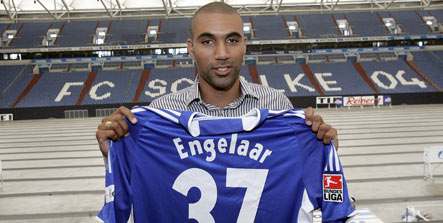 Bayern virtually rebuilt their squad in the summer of 2007 spending €69 million ($100 million) and one of the few additions to their squad has been to sign midfielder Tim Borowski on a free transfer.

Champions League contenders Schalke 04 wasted no time over the summer by recruiting two stars of the Dutch League under new coach Fred Rutten. Holland midfielder Orlando Engelaar was signed from FC Twente in a deal worth a reported €6 million euros and PSV Eindhoven’s Peru international striker Jefferson Farfan was also brought in by the Royal Blues.

Schalke beat off challenges from Italian side Fiorentina, Tottenham and a Russian club to sign the 23-year-old Farfan on a four-year contract reported to be worth around €10 million.

“He is a very solid player who can only help but take the club forward,” said Schalke general manager Andreas Müller. After finishing second in the table last season, Werder Bremen lost striker Ivan Klasnic to French club Nantes and midfielder Borowski to Bayern.

In contrast, ambitious VfL Wolfsburg finished the season with a late flurry which earned themselves a UEFA Cup berth and improved their side with two Italian World Cup winners in Andrea Barzagli and Cristian Zaccardo. Both centre back Barzagli, 27, and right-back Zaccardo, 26, joined from Palermo as coach Felix Magath looks to expand on last season’s fifth place finish.

Dutch defender Khalid Boulahrouz was signed from Chelsea, having been on loan at Sevilla, and Germany goalkeeper Jens Lehmann, 38, was signed on a one-year contract having spent most of last year on the bench at Arsenal. Mid-table Hannover have strengthened their strike force for next season by bringing in former Birmingham and Chelsea forward Mikael Forssell and the flying Finn will be joined by Bayern reject Jan Schlaudraff.

The Germany international barely had a look in at Bayern last season and was fourth-choice striker behind Miroslav Klose, Luca Toni and Lukas Podolski. Of the sides coming up next season, Cologne have been the most aggressive in the transfer market.