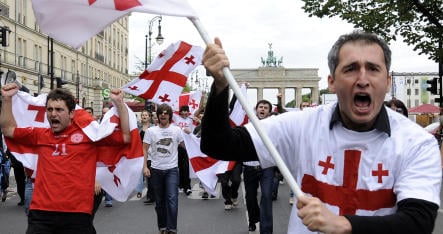 Shouting “Russia out of Georgia” and “Stop the war,” the protestors handed petitions to representatives at the embassies of Russia and France, which currently holds the European Union presidency, as well as the German Chancellery.

Russian politicians said on Tuesday they had stopped their offensive on Georgian soil, and were ready to sign up to a French-sponsored cease-fire agreement.

But the Georgian government, which had previously said Russian troops were heading for the capital Tbilisi, insisted Russian bombings were continuing in three villages in the north of the country.

French President Nicholas Sarkozy visited Moscow earlier on Tuesday and accepted his Russian counterpart Dmitri Medvedev’s assurances that the offensive had stopped. But he said the sovereignty and security of Georgia should be protected. “Russia must use its power to secure peace,” Sarkozy said.

Sarkozy was expected to visit Georgian President Mikhail Saakashvili later in the day. Saakashvili welcomed the Russian announcement but remained unconvinced that the attacks had in fact stopped.

Saakashvili also announced he was taking Georgia out of the Commonwealth of Independent States – the successor organization of the Soviet Union.

Bombs dropped in Gori on Tuesday morning killed several people, including a Dutch journalist working for the RTL television channel.

German Chancellor Angela Merkel is due to meet Medvedev in the Russian town of Sotchi on Friday. The town, which will host the 2014 winter Olympics, is just across the border from the Georgian breakaway region of Abkhazia on the Black Sea coast.

Yet what was originally planned to be a relaxed and informal meeting between the two leaders will now likely be firmly focused on the conflict of the last few days.

German Defence Minister Franz Josef Jung told the Rheinische Post on Tuesday that Georgia’s candidacy as a potential NATO member must be pursued despite hostilities between Georgian and Russian forces in South Ossetia.

“Following the latest developments, the impression should not emerge that

Georgia is now excluded for an unlimited period from NATO membership,” said Jung. “We must draw Russia’s attention to respecting the sovereignty of Georgia with regards to international law.”

France and Germany, with the support of a dozen other countries, refused to grant Georgia and Ukraine candidacy as prospective NATO members at the bloc’s last summit in April. By calling for Georgia’s progressive integration into NATO, the United States sparked tense relations with Russia, which fears an expansion of the North Atlantic alliance on its southern doorstep.

Abkhazia, and said he was worried the situation there was becoming “more and more fragile”. However, he said 12 Bundeswehr soldiers stationed in the region as part of the UNOMIG peacekeeping forces would stay put for now.

“They don’t want to give the wrong political signal, and they want as medics and doctors to be able to continue to help the civilian population,” Jung told the paper.

Hundreds of German civilians have already left Georgia because of the current conflict and 100 more left by bus for the Armenian capital Yerevan, the German Foreign Ministry said on Monday.