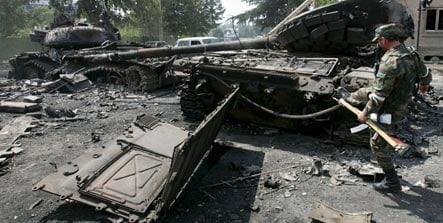 “Following the latest developments, the impression should not emerge that

Georgia is now excluded for an unlimited period from NATO membership,” said Jung. “We must draw Russia’s attention to respecting the sovereignty of Georgia with regards to international law.”

France and Germany, with the support of a dozen other countries, refused to grant Georgia and Ukraine candidacy as prospective NATO members at the bloc’s last summit in April. By calling for Georgia’s progressive integration into NATO, the United States sparked tense relations with Russia, which fears an expansion of the North Atlantic alliance on its southern doorstep.

Abkhazia, and said he was worried the situation there was becoming “more and more fragile”. However, he said 12 Bundeswehr soldiers stationed in the region as part of the UNOMIG peacekeeping forces would stay put for now.

“They don’t want to give the wrong political signal, and they want as medics and doctors to be able to continue to help the civilian population,” Jung told the paper.

Hundreds of German civilians have already left Georgia because of the current conflict and 100 more left by bus for the Armenian capital Yerevan, the German Foreign Ministry said on Monday.