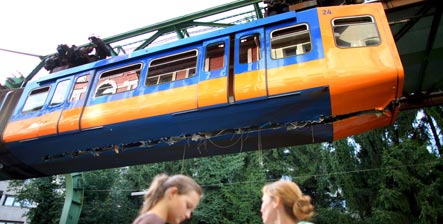 The mobile crane on the back of a truck sliced open the bottom of a railway car on Tuesday. No one in the car was injured in the incident, but the 46-year-old truck driver was seriously hurt and taken to a hospital.

The driver was trying to unload construction materials from the truck as he oversaw the oncoming railway car. Damages have been estimated at €100,000.

The 107-year-old suspension railway in Wuppertal was long considered one of the safest forms of transportation in Germany until an accident in 1999. Renovation work on the track caused a car to plunge into the Wupper River, killing five passengers.