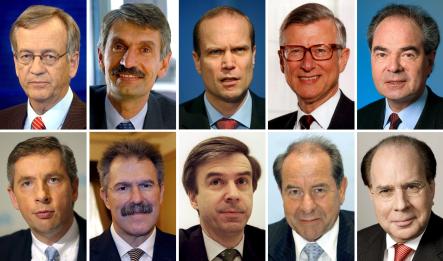 Among the 11 former executives targeted are former Siemens bosses Heinrich von Pierer and Klaus Kleinfeld, the company said in a statement.

Siemens “is asserting claims for damages against former members of the former corporate executive committee of the managing board of Siemens AG,” the statement said.

The company “bases its claims on breaches of their organizational and supervisory duties in view of the accusations of illegal business practices and extensive bribery” that marked operations from 2003 to 2006. Those actions had since resulted in “financial burdens to the company,” Siemens said.

The 11 directors “will be given an opportunity to state their positions on the accusations before legal action for damages is taken,” the statement added.

Siemens did not specify the amount of damages it would seek.

Kleinfeld is currently the chief executive officer of aluminium giant Alcoa. German justice officials are still investigating the corporate scandal, which erupted in late 2006 and has since shaken Siemens to its core. The sprawling industrial has acknowledged that €1.3 billion ($2 billion) was funneled into various funds used to obtain foreign contracts, and that the practice was widespread across its numerous divisions.

The 160-year-old group manufactures products from light bulbs and medical equipment to railway trains and power stations, and employs around 400,000 people worldwide. It agreed in October to pay a fine of €201 million to put an end to some German legal proceedings, but is also the subject of a potentially damaging probe by the US Securities and Exchange Commission.

Siemens shares are listed in the United States where it could be barred from bidding on public contracts – one reason why it might have taken such drastic action. Siemens was also accused of having built up the leader of a small independent trade union in exchange for support against attacks by the giant IG Metall union.

Current chief executive Peter Löscher was brought in from outside the company a year ago to sort out the mess, while a former Siemens executive, Reinhard Siekaczek, was convicted Monday in the first trial of a company director.

Siekaczek was found guilty on 49 counts of breach of trust, given a two-year suspended sentence and ordered to pay €108,000 ($170,000) in fines – a relatively light penalty owing to the fact that he cooperated with the investigation. A probe ordered by Siemans itself found that practices Siekaczek was charged with existed within many of its divisions.

Prosecutors in Munich are still investigating around 300 people in connection with the affair. In addition to von Pierer and Kleinfeld, Siemens identified the other executives as Johannes Feldmayer, Thomas Ganswindt, Edward Krubasik, Rudi Lamprecht, Heinz-Joachim Neubuerger, Jürgen Radomski, Uriel Sharef and Klaus Wucherer.

Günter Wilhelm, a former corporate executive committee member would face other claims for damages, along with Feldmayer, the company said. Von Pierer, who ran Siemens for 13 years before he became supervisory board president in 2005, will not face criminal charges in connection with the scandal however, Munich prosecutors said in early May.

Von Pierer, Kleinfeld and some other former Siemens directors might qualify for insurance coverage taken out by Siemens under a Director’ and Officers’ Liability Insurance scheme with an insurance consortium lead by the German group Allianz.