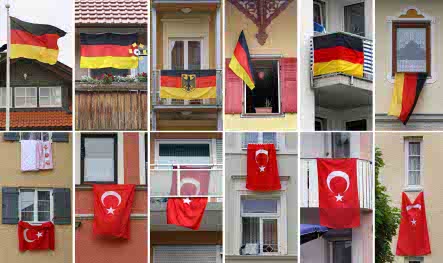 Germans young and old are likely to hunker down in front of TV sets at home and massive public viewing screens across the country to watch the match in Basel, ed Germany can overcome Turkey’s commitment. “Of course, our team will win againsSwitzerland that is the last stop to the European Championships final.

They will be joined by the country’s sizable Turkish community – an estimated 2.6 million strong – who will be cheering on Turkey’s gutsy team that has impressed during the tournament with its unflagging determination to win.

The biggest football fest in Germany will be Berlin’s so-called fan mile, which is expected up to attract up to half a million people near the city’s landmark Brandenburg Gate. There fans can watch the semifinal on three huge screens placed along a kilometre-long party zone.

Berlin’s Mayor Klaus Wowereit said the city can’t lose because of its large Turkish population, but he and others called on fans to celebrate peacefully regardless of the outcome.

In Munich, 300 uniformed officers will keep the revelry in check, a third of them outside the Olympic stadium where 30,000 people will watch the game via satellite from Basel. Police said things were “relatively calm” in town but said they would keep a close eye on the hordes of fans.

“What we fear the most is if Germany loses and a few take out their frustration on the Turks,” he said.

In Germany’s business capital Frankfurt, 8,000 people are expected at Wedau Stadium to follow the match via satellite.

Authorities in Hamburg and Cologne, which both have large Turkish minorities, would not comment on the deployment Wednesday but a police spokesman in Hamburg predicted “a peaceful and happy” night whatever the outcome.

But Rosemarie Ballack, the grandmother German captain Michael, is convinced favoured Germany can overcome Turkey’s commitment. “Of course, our team will win against the Turks,” she told RTL radio on Wednesday, before confidently looking forward to Germany’s potential opponents in the final.

“I’d rather have the Spaniards than the Russian team,” she said. “The Spaniards play a very cultivated type of football. The Russians play very fast making them very unpredictable.”