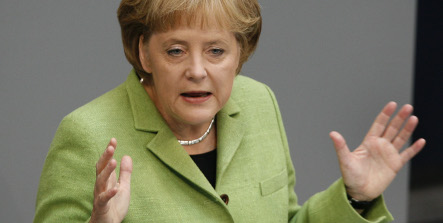 “We must see to it that treaties in the European Union are developed together unanimously. There is no other way,” Merkel said ahead of a two-day EU summit in Brussels.

“However difficult it may be, unanimity is essential … Talk of a two-speed Europe, a core Europe, does not bring us forward at all,” Merkel told parliament. “I think such a discussion is counter-productive and also in part negligent.”

She added: “We need the Lisbon Treaty.”

Irish voters plunged the EU into a new institutional crisis by voting “no” last week on the treaty which provides the legal framework for expansion of the bloc, speeds up decision-making and provides for a semi-permanent EU president as well as a more powerful foreign affairs representative.

The Irish referendum result prompted talk – fuelled by officials such as Merkel’s deputy, Foreign Minister Frank-Walter Steinmeier, among others – that a core of EU members, led by Germany and France, would press ahead with closer European integration on their own.

Germany has already ratified it and once Britain’s queen adds her signature on Thursday morning the treaty will have been passed by 19 EU states. Ireland was the only country to hold a referendum.

Merkel said that the EU “cannot afford another period of reflection” of the kind that ensued after Dutch and French voters rejected in referendums in 2005 the European Constitution – the forerunner to Lisbon.

EU leaders “must make a fundamental decision as quickly as possible, so that we know in what form and what basis we will conduct the European elections in June 2009,” she said.

Merkel added that it was possible for EU states to be able to opt out of certain aspects of European integration, such as monetary union, European defence policy or the Schengen Agreement on a passport-free zone.

“But when it comes to institutional questions … We need unanimity,” she said. “I am convinced that we will and can find a solution.”

Irish Prime Minister Brian Cowen was due to give his assessment of the options available in Ireland at a dinner of EU leaders on Thursday evening in Brussels.

“Of course we have to listen to the Irish and we will listen to their arguments … We should give Ireland the chance to get itself back into the game. I believe that is the best way,” Merkel said.