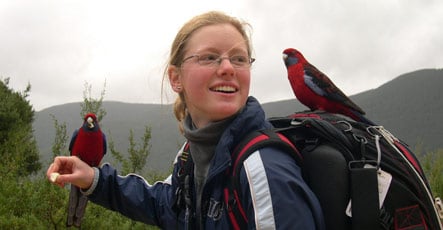 “The MONUC (the United Nations Mission in DRC) informed us this morning that a young woman reported missing has been found and that she was identified as the researcher,” a ministry spokesman told AFP.

The evolutionary anthropology specialist, 23-year-old Esther Carlitz, was observing endangered Bonobo apes in the Salonga National Park for Germany’s Max Planck Institute when she vanished on May 22.

“She was found today by a group of priests,” the African affairs spokesman for the Christian Union parliamentary group, Hartwig Fischer, said in a statement, also citing MONUC.

“According to preliminary information, she is doing fine under the circumstances,” he added, saying she would be taken to the capital Kinshasa as soon as possible.

The Max Planck Institute said when Carlitz disappeared that she had left an assistant while working in the field and planned to return to their base at Camp Lui Kotal in the southwest of the park alone, ignoring warnings not to do so.

Search parties had combed the dense terrain around the camp in the park, Africa’s largest tropical rainforest reserve, but found no trace of her.

Salonga, a UNESCO World Heritage site, is one of five major wildlife reserves in DR Congo. Like the others, it is prey to poaching by warring factions in the vast conflict-ridden country.