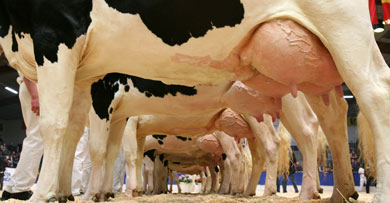 “The dairies are waiting out the problem and us farmers have to face the music,” BDM head Romauld Schaber told German daily Neuen Osnabrücker Zeitung on Tuesday.

“We demand a minimum price of 43 cents per liter,” said Schaber, who added that German creameries bear part of the blame for a decline in milk prices that has annoyed dairy farmers since January. Prices have dropped from 40 cents per liter to between 28 and 34 cents, hitting northern German diary farmers particularly hard, he said.

“The most irritating thing is that we’ve led strategy talks with the creameries to end the price discrepancies in the market, but they haven’t been responsive,” Schaber told the paper.

The BDM has some 33,000 members who deliver about 50 percent of Germany’s milk.

Milk that goes undelivered during the strike will be fed to the farmer’s calves. “And what they don’t drink goes in the gutter,” Schaber said.