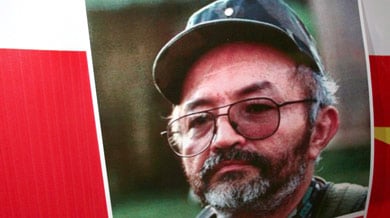 An image of FARC leader Paul Reyes on a poster. Photo: DPA

Reyes, the number two commander in the Revolutionary Armed Forces of Colombia (FARC), was killed on March 1 in a raid by Colombian forces just inside Ecuador.

Emails on his laptop show that in January 2005 he sent his son to Germany in a secret mission, Der Spiegel said in an article to be published Monday.

There his son met with members of the German communist party and with far-left politician Wolfgang Gehrcke, who offered to press the European Parliament to take the FARC off its list of terrorist organizations.

“It was a very positive meeting,” Der Spiegel quotes an email found on Reyes’s laptop. “We were able to substantiate several points to reactivate solidarity with the struggle of the Colombian people.”

Computer data discovered after the March 1 raid has already increased tensions in South America, with Colombia saying they proved links between the FARC and Ecuadoran and Venezuelan officials, including President Hugo Chavez.

The FARC is considered a terrorist organization by Washington. It is believed to hold around 750 people hostage including French-Colombian politician Ingrid Betancourt, trafficking drugs to fund its insurgency.