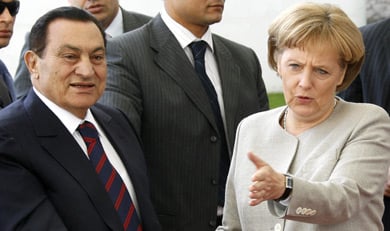 “It is very important that the international community takes measures to lower the prices of food products,” especially in developing countries, Merkel told a press conference in Berlin on Wednesday alongside Egyptian President Hosni Mubarak.

This theme will be the focus of the FAO (the UN’s Food and Agriculture Organization) in Rome in June, then again at the G8 summit” of the world’s leading industrialized nations in Japan in July, she said.

These pledges to the UN’s World Food Programme were in addition to Germany’s annual contribution of €23 million ($36.5 million).

The UN food agency said that the world faced a ‘silent tsunami’ of soaring food prices ahead of a summit in London on Tuesday aimed at kickstarting a plan to tackle a potential hunger crisis.

Food prices have been spiralling due to the use of certain foods in biofuels to combat climate change; rising populations; strong demand from developing countries, and floods and droughts blamed on climate change.

The rising prices have caused rioting and death in parts of Africa and central America.