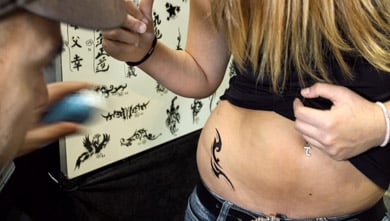 An airbrush tattoo at a teen fair in Berlin. Photo:DPA

Up to 20 percent of tattoos and piercings lead to complications ranging from infections to hepatitis, Wolfram Hartmann, president of the Professional Association of Children’s and Young People’s Physicians, told the Wednesday edition of the daily newspaper Frankfurter Rundschau.

Hartmann said it is “not acceptable” for nearly half of German girls between the ages of 14 and 18 and about a quarter of the boys to put their health in danger “because of a whim or peer pressure.”

It is reckless for parents to pierce the noses of children as young as three years old, he said.

“Here it’s about tampering with a healthy body without any medical imperative whatsoever,” Hartmann told the newspaper.

The German parliament will discuss cosmetic surgery abuse on Wednesday, with both the conservative Christian Democrats and the center-left Social Democrats pushing for stronger government oversight.