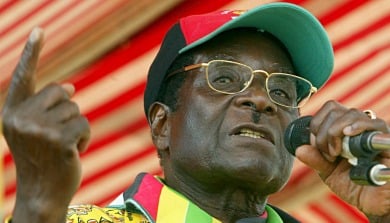 The Kreditanstalt für Wiederaufbau (KfW) obtained the authority to impound the shipment from a South African court in Durban, bank spokesman Michael Helbig told the website of German newsmagazine Der Spiegel. But the vessel had already headed out to sea last Friday before the court order could be carried out.

The Chinese ship An Yue Jiang supposedly is carrying more than 70 tonnes of weapons and amunition for impoverished and landlocked Zimbabwe. The KfW, however, didn’t know the nature of the cargo before pushing for it to be impounded.

“The company certainly wasn’t aware of type of shipment at that time in question,” Helbig said, explaining that the development bank was merely trying to recoup some of a bad loan to Zimbabwe’s state owned Iron & Steel Company worth a “double-digit million sum.”

Since Zimbabwe’s government offered to guarantee the loan that the company failed to repay, the KfW is attempting to make use of a legal ruling from 2006 allowing the bank to impound any of Zimbabwe’s assets abroad.

The ship, reportedly now on its way to Angola, could have a hard time finding a port to unload its cargo. The United States is now reportedly pushing southern African nations bordering Zimbabwe to deny the An Yue Jiang the right to anchor in order to keep the weapons from getting to Mugabe’s security forces. Washington is hoping to increase pressure on Mugabe’s regime after a contested election on March 29 that independent observers believe the country’s embattled opposition won.