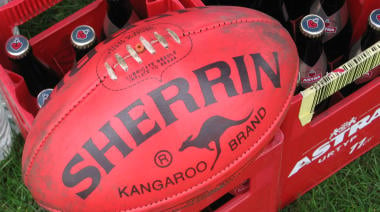 It’s a typical spring Saturday in a Hamburg park: there are the usual clusters of groups worshipping their barbecues, a few folks struggling to control their kites, as well as several grown men chasing a muddy soccer ball around and taking dramatic dives any time there’s the slightest contact.

Yep, it’s a normal day in Germany – except for that other massive group of blokes fighting to the death over a red, egg-shaped ball, while bemused onlookers stop to watch a bizarre sporting spectacle.

Australian Rules Football, a special Down Under concoction of rugby and Gaelic football, was first played in 1858. A century and half later, the game is still pretty much confined to Australia’s shores, even if it sometimes draws crowds there of up to 100,000.

The game in Hamburg’s Stadtpark – between the Hamburg Dockers and the Berlin Crocodiles – only drew about 50 people. And plenty of them watched and cheered with as much bewilderment as enthusiasm. The few Australians on hand did their best to explain the rules and punctuated their sentences with toothy, larrikin grins while saying things like: “You just get the bloody ball and kick it as far as you can.”

If you have never seen the game before, the rules can indeed be difficult to understand. Yes, it is about kicking the ball as far as you can. A goal (kicking the egg through the middle of the four white sticks) is worth six points while kicking it to either side is worth one. Teams move the ball by kicking, hand passing (hitting the ball with a fist) and marking (catching the ball on the full from a kick). The game is fast, athletic and physical, and injuries are very common. Players can tackle (from shoulder to thigh) and bump each other, and massive brawls were once a fixture of the sport. At the highest level, the game is an unsurpassed spectacle of skill, violence, athleticism and brutality.

But this match in the Stadtpark was hardly a spectacle beyond the novelty of Australia’s national game being played on German turf mostly by Germans. The players on both sides, most of them still picking up the game, were still impressive given that they grew up playing soccer – as we Australians call football. But the idea of ball in hand still takes a while for them to get used to and they often got for the ball feet first. But some Germans even say it’s the limitations of soccer that attract them to Australian football.

“Aussie Rules is so much more dynamic and flowing,” says Malte Schudlich, founder of the Frankfurt Redbacks and the Australian Football League Germany. It was he who imported the game in 1995 after living in Melbourne. Since then, the game has slowly garnered interest with teams in Munich (also established in 1995) and Cologne helping make up a league of five teams. But further north, the game is also becoming increasingly popular in Denmark, Sweden and Finland.

“It’s a very tense and unique sport,” says 21-year-old Marvin Bense, captain of the Berlin Crocodiles. “And it’s a sport everyone can play. In soccer, there’s a lot of faking and I don’t like faking.”

The physicality and tempo of the game is attracting young Germans from all over the country, enough so for there to be a national team – of sorts. “It’s a great opportunity for younger people to get into a new sport,” says Daniel Minsen, a 23-year-old from Hamburg. “It’s different to anything you have here in Europe. And it’s tougher and faster than soccer.”

While not as fast as in Australia, the game in Hamburg was still exciting and physical. The hits were hard and the grunts and groans real and well-earned. The old umpire struggled to keep up and all the players limped off at the end, smiling and slapping each other on the back. Because they are still learning, the games are not as competitive (or as underhanded) as they tend to be in Australia. They are played in a good spirit and everyone has a beer together after the game. The cigarettes come out and players field questions from spectators who have stopped to watch. The big talking point is comparing the game to soccer, and the justification for playing Australian Football is always in the context of Germany’s national pastime.

“I grew up as a soccer supporter, but now that I play Aussie Rules, I find soccer more and more boring,” says wily Berlin veteran Frank Donat.

That could be because there are a lot more goals in Australian football – fans don’t have to wait 90 minutes for something (often nothing) to cheer about. Hamburg kicked 15 goals to Berlin’s 7, and ran out winners by 50 points. But in the end the real winner was the game itself, as a couple of young locals walked from their soccer game over to the Foster’s tent to find out what the sport was all about. Fair dinkum, looks like Hamburg might have recruited a few more players.

On May 31, Germany plays an AFLG (Aussie) all star team in Cologne. The league final takes place on September 6 in Munich.