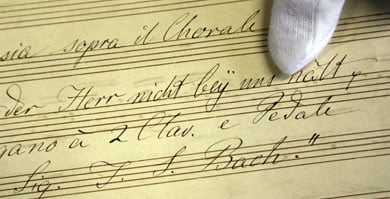 The piece, entitled “Wo Gott der Herr nicht bei uns hält” (Where God the Lord does not stay by our side), was found in an auction lot by professors from the Martin-Luther University in Halle, said one of them, Stephan Blaut. He stumbled upon the organ composition in a collection that had belonged to the 19th century Leipzig musician Wilhelm Rust and was being prepared for sale, Blaut said.

“While reviewing the items to be auctioned, I came across a piece from Bach that I did not know. With that began the research,” Blaut said. He said experts from the Bach Archive in Leipzig examined the work and confirmed that it was indeed composed by Bach, probably between 1705 and 1710. They found that the work is the complete version of a fragment of music of the same name that has long been attributed to Bach, though questions remained about its providence, Blaut said.

It has been listed in catalogues of the legendary 18th century composer’s works with the disclaimer “origin not verified.”

Bach was born in Eisenach in central Germany 1685 and died in 1750. In recent years, a string of lost or previously unknown compositions by Bach have been discovered.