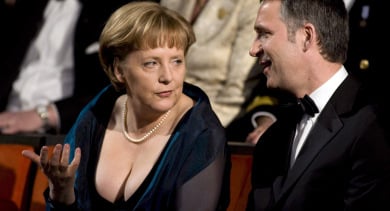 The paper said 53-year-old Merkel has never been seen in something so revealing, but called her choice “elegant,” “feminine,” and “stately.”

Merkel’s black evening gown paired with a deep turquoise bolero shawl and classic pearl necklace was a far cry from the stuffy pink gown she wore to a Bayreuth opera two years ago – which revealed tabloid-friendly sweat stains as she waved to eager photographers.

See The Local’s photo gallery of Merkel in Oslo here.

Merkel, an avid opera fan, joined King Harald V and Queen Sonja of Norway for the inauguration of the €500 million striking structure on the bank of Oslo’s fjord.

“I congratulate Norway on its new opera house,” Merkel told reporters at the event. “It’s a highlight in the history of European architecture.”

German government spokesman Thomas Steg said on Monday he had been flooded with questions about the dress and its unprecedented amount of chancellor cleavage.

“That this dress caused such a furore, seemed excessive to the chancellor,” Steg told reporters at a weekly briefing. “She was not distraught as the reporting was quite kind and she received many compliments, but if the world has nothing more important to do than to talk about or report on evening dresses, what can one do?”