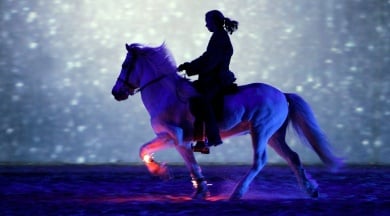 Take an American singer, and a British guitarist and you’ve got a super cute rock duo that as the BBC says, “gets straight to the dirty little point.” Alison “VV” Mosshart and Jamie “Hotel” Hince met in a hotel while both were on tour with different bands. They formed their own band, called it The Kills, and recently set off on a mega world tour in support of their third album, Midnight Boom.

Suzuki Night of the Jumps

If terms like “motocross” and “gravity-defying tricks” get you pumped, head to Max-Schmeling-Halle April 5 and 6, for this major international freestyle tournament, where the world’s most daring stunt masters embark on wild rides.

Saturday kicks off ten weeks of exhibitions, lectures, performances, workshops, concerts, film screenings, and field trips, as the city hosts its fifth Berlin Biennial for Contemporary Art. This year’s event features works that respond to the spaces where they are displayed, such as the former margarine factory, the KW Institute for Contemporary Art, the Mies van der Rohe designed Neue Nationalgalerie, and the expanse of empty lots known as the Skulpturenpark Berlin_Zentrum. It’s going to be an artful April.

While weaving their way through flames and prancing around sets with names like “Spirit of India,” “Arabian Nights,” and “Sparkling Diamonds,” horses from around the world lead the audience on a “Grand Voyage.” Not to be missed by horse lovers, Apassionata is an exceptional show of equestrian skill.

The UK trip-hop trio is back, and unleashing songs from their latest album, Third, on audiences across Europe this spring. They take the stage in Cologne on Sunday.

Frankfurt’s 50-acre floral paradise, the PalmenGarten, is home to one of the largest greenhouse complexes in the world, an exquisite collection of sub-tropical plants, and through April 13, a fabulous display of azaleas!

A Heaven On Earth

The bronze disc with gold inlay, known as the “Sky Disc of Nebra” is 3,600 years old. It’s the most ancient known representation of the cosmos, and one of central Europe’s most important archaeological discoveries. This exhibition presents the exquisite relic, and examines astronomy during the bronze age.

This swinging outfit has been bringing New Orleans style jazz to Hamburg for the past 25-years. Their regular jam session at Das Riff is a grand old time.

By comparing the work of German-French avant-garde artist Hans Arp, with the “biomorphic” works of the German artist Fritz Winter, this exhibition attempts to determine how the former influenced modern art. An intriguing exercise indeed.