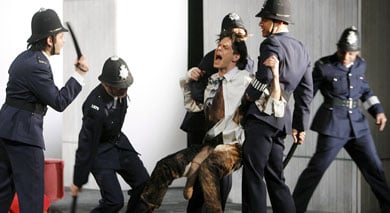 Aiman Mazyek called on Muslims to engage in a “critical and constructive dialogue” about the issues it raises, but also questioned whether the play might go too far.

“Freedom of expression and of art is important but offences against what is sacred in a religion is not something we value,” he told RBB public radio.

Other German Muslims expressed “regret” on Friday that the theatre in the city of Potsdam near Berlin plans to stage the premiere.

“We regret that the religious sentiments of Muslims are being treated in a provocative manner,” the president of the German Islamic Council, Ali Kizilkaya, told news agency AFP after his organization publicly complained about the scheduled performance.

Iran’s late revolutionary leader Ayatollah Ruhollah Khomeini issued a fatwa – or religious decree – in 1989 calling on Muslims to kill Rushdie for perceived insults against Islam in his novel.

Rushdie, an Indian-born Muslim who was educated in Britain, was forced into hiding for nearly a decade. He was knighted by Britain’s Queen Elizabeth II in 2007, a move that sparked a new wave of protests across the Muslim world.

The play, adapted from Rushdie’s 1988 book, was reworked for the stage by the manager of Potsdam’s Hans Otto Theatre, Uwe Eric Laufenberg, and dramatist Marcus Mislin.

A police spokeswoman said authorities planned to step up security around the theatre during the performance.

The team in Potsdam said they had received permission from Rushdie to adapt his novel and had invited him to the performance but they said it was unclear whether the author would attend.

Germany has seen previous controversies over the line between artistic freedom and respect for religious sensibilities.

In 2006, Berlin’s German Opera House hastily pulled a staging of Mozart’s “Idomeneo” featuring the severed head of the Prophet Mohammed over fears of protests by Muslims.

After a heated debate about self-censorship, the opera was finally presented under tight security.