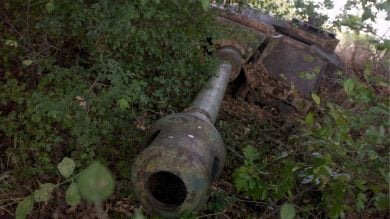 A German tank at the Bulgarian-Turkish border. Photo: dpa

Bulgaria is selling German tanks from World War II for about €100,000. This is the starting price, according to the Sunday edition of Bulgarian daily Trud in Sofia. The Bulgarian Defence Ministry plans to auction some 22 German Wehrmacht tanks and assault guns. The best-preserved pieces will be offered to museums before auctions begin.

Bulgaria was allied with Germany during the Second World War, and the German military sent the tanks to the country during that time. The Bulgarian army later used the same weapons to fight Nazi Germany until its surrender in May 1945. At the end of the 1950s, the tanks that weren’t scrapped were cemented into a barrier to protect the formerly communist Eastern Bloc country on the Turkish border.

Now that both Bulgaria and Turkey are NATO members, the tanks are no longer necessary to protect the border.

In December 2007, Bulgarian authorities arrested two German nationals and a Bulgarian army officer who allegedly stole a German Wehrmacht tank and attempted to steal a second one near the southeastern town of Jambul in Bulgaria.