EXPLAINED: A language teacher's guide to passing the German tests for citizenship

Depending on whether they take the regular track or the fast track to German citizenship in future, applicants will likely have to pass either the B1 or C1 German test. Here’s what a language teacher tells us to expect.

As long-time German residents start preparing their applications for when Germany changes its citizenship laws to allow dual nationality, some are already booking the language tests they’ll need for the German language requirement.

Those applying on the regular track, which the government plans to allow after five years of legal residency in Germany, will need to pass a B1 German exam - the third level out of a possible six in the Common European Framework of Languages.

Meanwhile, those looking to naturalise as German after just three years on the government’s planned fast-track scheme, will likely need to pass the C1 exam - the second-highest level possible.

What does someone need to be able to do for the B1 exam?

B1 is an intermediate level where the speaker can understand the main points of conversations around everyday topics, such as work, school, or living. They can also deal with most situations that would come up on a trip and they can make basic arguments about a subject they’re familiar with, such as the field they work in.

“They need to be able to discuss a topic with the pros and cons,” Birgit Schneider, a Goethe Institute language teacher with 33 years of experience, told The Local’s Germany in Focus podcast. “The main part in the oral exam and the written exam will be discussing a point.”

A German exam will have four sections: listening, writing, speaking, and reading. Schneider says the listening and reading parts are easy to practice on your own using internet resources. There are also some practice tests available to get you used to some of the types of questions that will be on the real test, such as fill in the blanks.

But she says the oral and writing sections are harder to prepare for alone. 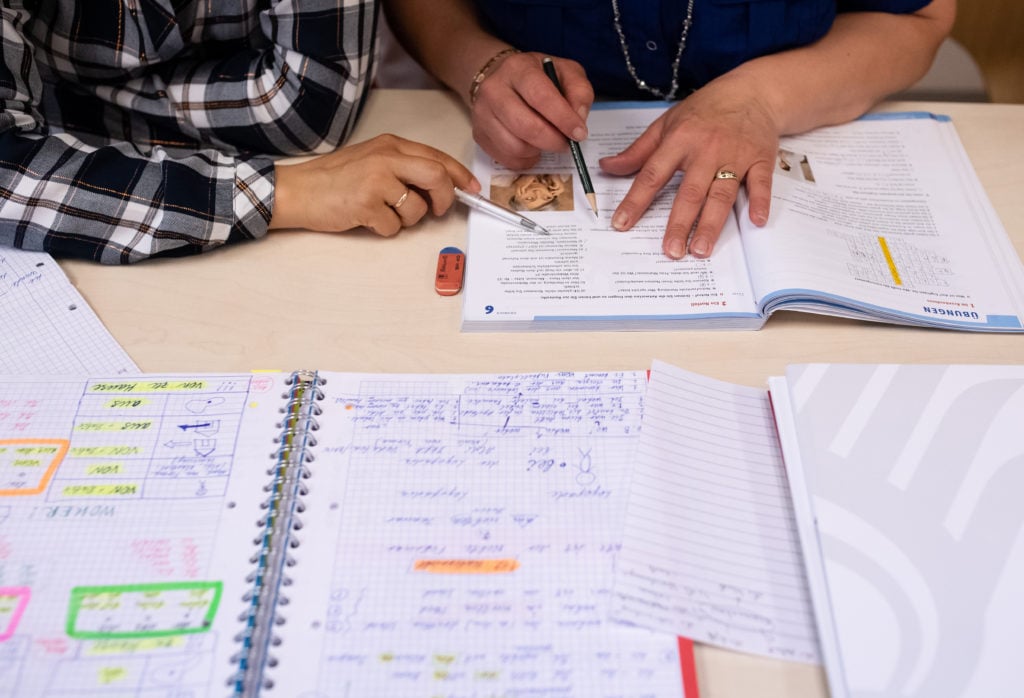 Schneider says one example of an oral exam questions would be whether children should move out of their parents’ houses when they turn 18.

“It’s an everyday discussion, but you need to be able to say something to that topic. You have only five or ten minutes—you’re nervous. So you have to be able to come up with pros and cons in a very, very short time,” she says. “That needs to be practiced.”

For the written section, students will have an hour to write three different texts. One answers a question with pros and cons before the test-taker comes to a conclusion. One is a standard letter and one is a formal letter.

Again, Schneider recommends finding a German-speaking space to be able to practice without German speakers being able to switch into English.

“Unfortunately, Germans like to speak English,” she says. “You have to find a person, a course, a group, where you say ‘ok, now we are speaking German.’”

READ ALSO: What we know so far about the new language requirements for German citizenship

The C1 exam for planned fast-track citizenship after three years is a much more difficult endeavor altogether.

C1 speakers are able to write structured texts on a wide variety of complex subjects, from globalisation to the impact of climate change. They can use German well in social, personal, and work-related settings. They can also understand implicit meanings and sarcasm.

“You have to have good nerves to enter the C1 exam,” she says, pointing out how C1 topics are more academic and less everyday.

For example, you might be asked deliberately vague or broad question about early childhood education. “Here, you come up with more academic and more sophisticated answers,” she says. “You need more knowledge.”