A giant aquarium burst in Berlin on Friday, sending a "tsunami" of water and 1,500 tropical fish gushing into a hotel lobby and spewing debris onto a nearby street.

Two people were taken to hospital with slight injuries from glass shards and all the fish died.

"A million litres of water and all the fish inside spilled onto the ground floor" of the hotel complex housing the aquarium, a spokesman for the Berlin fire department told AFP.

"It was a full-on tsunami," said Berlin Mayor Franziska Giffey, adding that it was pure luck the incident had happened in the early morning when very few people were around. 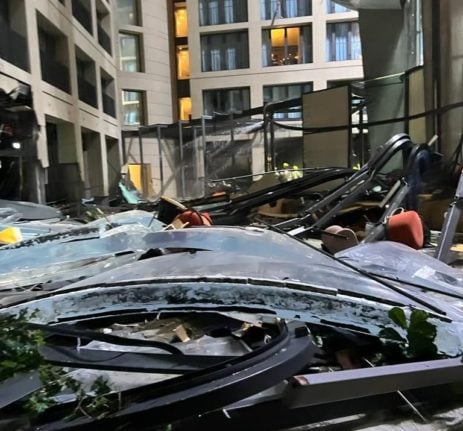 Photo from a firefighter at the scene, courtesy of Rachel Stern

The 1,500 fish in the tank however "could not be saved", Giffey added.

One firefighter at the scene told The Local that it was a difficult task to collect the fish because they were "all over the place" and "no one knew which ones were poisonous".

"I just heard a really loud noise and saw that the big fish tank was broken," one eyewitness reported. "I then looked out the front and saw a lot of things lying on the road and then realised that the aquarium had just burst and everything had been flushed out." 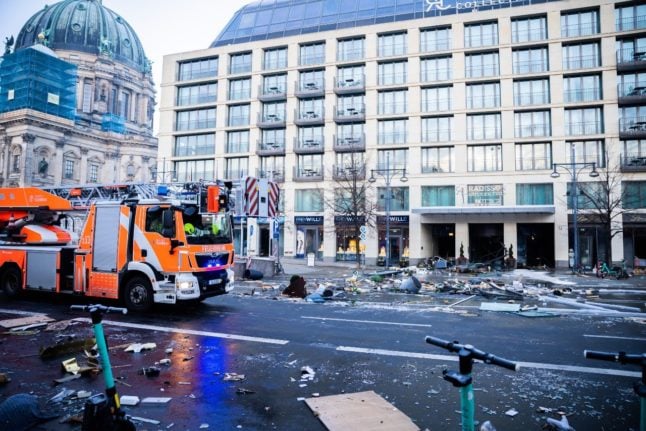 Broken glass and flooding on Karl-Liebknecht Straße in the aftermath of the aquarium incident. Photo: picture alliance/dpa | Christoph Soeder

Pictures and videos circulating online on Friday, apparently from guests staying at the hotel, showed extensive damage to the transparent aquarium, with only the frame still standing.

The below clip shows the aftermath of the incident.

More than 100 emergency workers were at the scene, Berlin's firefighting service said on Friday morning.

It's not clear yet what caused the aquarium to break.

Not too sure what’s happening but there’s a lot of emergency services doing their best #radissonblu #berlin #hotel #aquadom #aquarium pic.twitter.com/EUzEjaE5MM

Bits of broken window panes and damaged furniture were scattered all around.

German lawmaker Sandra Weeser, who was staying at the hotel when the aquarium burst, said she was woken up by "a kind of shock wave".

"There was a slight tremor of the building and my first guess was an earthquake," she told the Berliner Morgenpost newspaper.

The area where the aquarium once stood was now just "dark and wet" she said, recalling how she saw "one of those large parrot fish lying on the ground, frozen".

The hotel has been evacuated and guests were offered shelter in heated buses amid freezing early morning temperatures, the fire service spokesman said.

The cylindrical aquarium contains over a million litres of water and is said to be home to around 1,500 tropical fish.

The tank has a clear-walled elevator built inside to be used by visitors to the Sea Life leisure complex.

A fire service spokesperson told regional broadcaster rbb that workers were trying to clean up water and debris.

"Due to the high water pressure in the aquarium, when it burst it took a whole lot of objects with it, which are now scattered on the street," said the spokesperson. 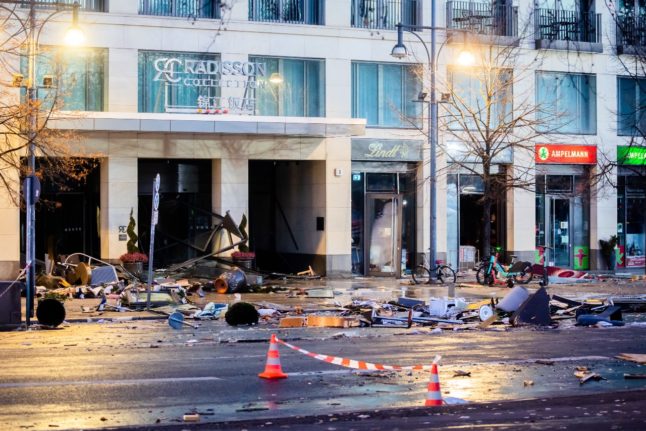 Berlin police on Twitter urged drivers to avoid the area, warning that water is "massively" leaking from the aquarium.

The nearby Karl-Liebknecht street has been partially closed off because there is "an extreme amount of water on the road", Berlin's public transport office said, also on Twitter.

The area around the complex was also sealed off and sniffer dogs were being used to search for possible victims among the devastation.

According to the Sea Life website, the AquaDom is the largest cylindrical, freestanding aquarium in the world.