After Germany crashed out of the World Cup earlier than expected, fans shared their disappointment.

In a quickly-emptying east Berlin bar, Eric Warncke is "disappointed" by Germany's shock exit from the World Cup, but says he already suspected it might happen.

After a surprise 2-1 loss in the opening game to Japan, the team left themselves a hill to climb to make it through to the knockout round in Qatar.

A tense 1-1 draw against Spain gave them hope of qualification, but the Spaniards' own defeat at the hands of the Japanese Thursday sealed the Germans' fate despite a turbulent 4-2 win over Costa Rica.

"Nobody expected Japan to beat Spain, but in the end we were knocked out deservedly," Warncke, 27, says.

To his mind, there are "too few characters, too few leaders" in Hansi Flick's squad compared with the previous sides.

Germany used to pride itself on being a "tournament team", which always had a chance of winning World Cups.

"Individually they are all good players, but it's not a team," he says, lamenting the disappearance of Bastian Schweinsteiger and Lukas Podolski, who lifted the trophy in 2014.

Like him, his friend Rico Wagner, 23, summed up the feeling: "Disappointed, but we also deserved it". 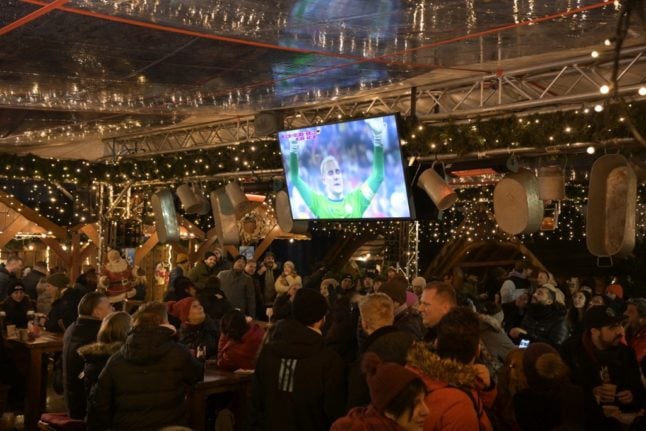 After a rollercoaster game in which Germany first seemed to be going through, then did not and finally could not do enough despite a late push, the
fans in the bar showed their frustration.

Even before the TV commentator confirmed Japan's win and Germany's exit, crying "this is a debacle, this is a disaster," some fans grabbed their coats and headed for the door.

The full-time whistle, when it came, was met with angry shouts.

Germany should have made it "to the quarter finals, definitely", says Levent Lanzke, 41.

"On paper it was possible, but Japan turned up. Costa Rica, too," he said with a shrug.

"Put it this way, I don't begrudge Japan," he said.

"The enthusiasm was already really low," said Sebastian Fichte, 48, reflecting on the controversial host nation Qatar and the decision to move the tournament to the European winter months from its traditional summer slot.

Concerns over human rights in Qatar have dogged preparations for the tournament and sparked calls by some of Germany's football fan clubs to boycott games.

When football's world governing body FIFA threatened teams with disciplinary action if they wore a rainbow armband to show support for diversity and inclusivity, the German players posed for a photo with their hands over their mouths. The message was clear -- they had been gagged.

Viewing figures for Germany's games so far have been well below their usual levels.

But Fichte says he will not be boycotting the rest of the World Cup despite Germany's exit.

Likewise, another fan, 43-year-old Michael Schreiber, says: "I'll watch a game or two. Definitely. I get excited about good games most of all."