The opposition CDU has accused the federal government of wanting to “sell off” German passports with its planned reform of German citizenship law – designed to make naturalising as German easier and allowing dual citizenship for non-EU nationals. One expert says the CDU could water down reforms.

Besides allowing dual citizenship for non-EU nationals, the federal traffic light government plans to shorten the amount of time someone needs to have been in Germany to naturalise as German from eight years to five. If someone has integrated well, for example by passing a B2 German exam, they would then be eligible for a fast-track of three years instead of the current six.

Under the plans, becoming German would also be simplified for both children and some seniors.

All three governing parties – the Social Democrats, Greens, and liberal Free Democrats – support the reform, as does the Left Party. Yet the CDU opposes the reforms, with parliamentary leader Thorsten Frei saying on Friday that “the German passport must not become junk.”

In a nutshell, it did this by collecting millions of signatures on a petition against allowing dual citizenship and winning the Hesse state election, before blocking the proposal in the Bundesrat – Germany’s upper chamber representing federal states.

So could history repeat itself? Could a citizenship reform law pass a Bundestag where the government has a majority only to be derailed yet again in the Bundesrat?

Dr. Ursula Münch, Director of the Academy for Political Education in Tutzing, says the short answer is yes - it's possible. But even in that event, she would still expect to see a compromise that would see a watered down law pass.

What is the Bundesrat and how could the CDU block citizenship reform in it?

Laws that pass the Bundestag then go to the Bundesrat, which has 69 seats representing Germany’s 16 states. Thirty-five votes are needed to reach a majority in that chamber.

The Bundesrat only has an advisory role on many laws. On these laws, the Bundestag can simply override the Bundesrat if it doesn't agree. Other laws, however, particularly those that have large effects on how federal states manage their services, and thus finances – require the Bundesrat’s consent.

Hakan Demir, an SPD MdB for Berlin-Neukölln, answering a constituent's question on Abgeornetenwatch.de, a watchdog website for German parliamentarians, argues the law is not expected to require the Bundesrat's agreement. He says that's because it will not have an impact on federal state financing.

Green MdB Filiz Polat also says the plan is that the law wouldn't need the Bundesrat's consent, suggesting the traffic light parties may try to write the law such that they can argue that it doesn't have to go to the upper chamber.

But Münch says there's a legal case to be made for why citizenship reform would need to go through the Bundesrat - giving the CDU the opportunity to block it - just as it did in 1999 when a previous dual citizenship proposal had a Bundestag majority but failed in the Bundesrat.

“If we look at a theme like the right to German nationality, naturally that’s something that strongly affects how the states run their own Interior ministries and their immigration offices - which actually implement the laws,” says Münch. “For this reason, laws affecting that would require the Bundesrat’s consent.”

Münch explains that each state has a certain number of seats that only roughly correspond to its population. Coalition governments within those states typically vote as a bloc though, rather than along party lines.

That means that Baden-Württemberg, for example, which has six seats under a Green-CDU coalition, doesn’t simply split 3-3 in the Bundesrat like their parties in the Bundestag might. The coalition government in that state has to decide together how all six of their votes will go. 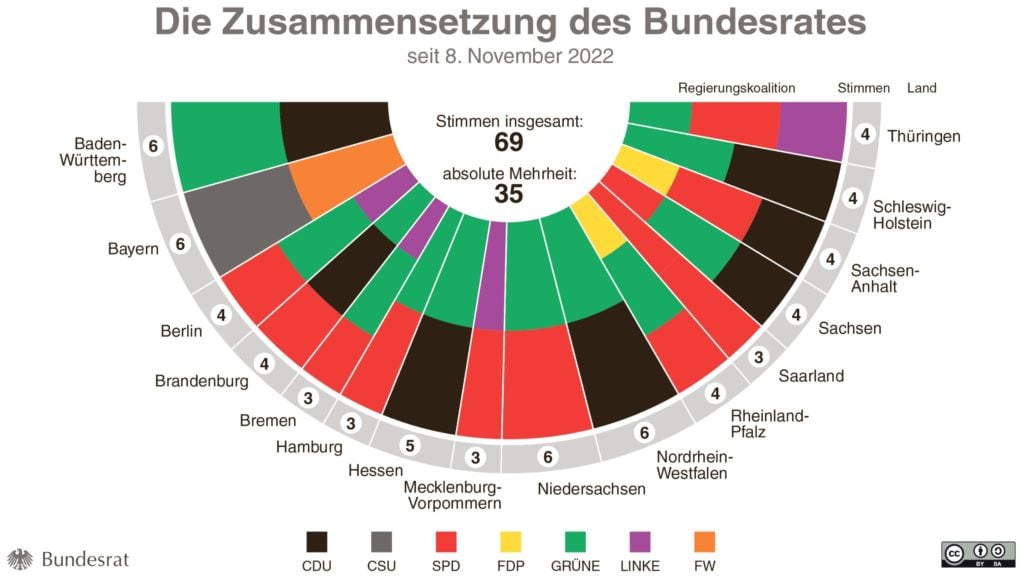 The current party composition of Germany's upper legislative chamber, the Bundesrat, which represents state governments. A citizenship reform bill must pass both the Bundestag and Bundesrat, which doesn't typically vote on party lines. It has 69 seats, with 35 votes needed for a majority. Image: Bundesrat

“The CDU and CSU don’t have actually have a majority in the Bundesrat, but they can, at the state level, push for their federal state to abstain from a vote,” Münch tells The Local. “And they’re in a lot of state governments.”

This means that the CDU in our example of Baden-Württemberg, a state where it shares power with the Greens, can prevent all six state votes from being cast in the Bundesrat – meaning that a citizenship law that’s passed the Bundestag can fall short of the 35 votes needed to pass in the Bundesrat – even when parties supporting the reform hold most of the seats.

“That’s why, when we’re discussing something like citizenship law, which would require the Bundesrat’s consent, an abstention is as good as a ‘no’ vote,” says Münch. “So the traffic light parties have to work with the Union here.”

Münch says it would be easier for the CDU to force their state to abstain on citizenship reform if they’re one of two parties - as in Baden-Württemberg - than if they’re outnumbered in their state government by two other pro-reform parties, as in Saxony. However, how a state votes also depends on which party leads the coalition or has the state's Interior Ministry.

Compromise still likely even if the CDU blocks citizenship reform

Münch says the traffic light parties will probably find it harder than normal to work with the CDU on a subject like citizenship law – an emotional topic that gets right at the question of who gets to be German. But she still expects a compromise.

“I don’t see a situation happening where the Union can block this proposal completely," says Münch. “They’re simply not strong enough politically right now to do that.”

Where Münch does see the potential for pushback from the CDU is not on whether dual citizenship should be allowed or not, but on the question of how long someone must be resident in Germany in order to naturalise.

This means that although the right to dual citizenship may still end up being passed, the time requirements may not end up being shortened as much as the current government might wish.

“We’re not in the 1990s anymore,” adds Münch. “German society is much different now than it was then. Germany is much more an immigration country now than we were even then. That’s why I don’t think this is an ‘all or nothing’ question of whether this passes or not.”

Composition of seats (in a political chamber) – (die) Sitzverteilung