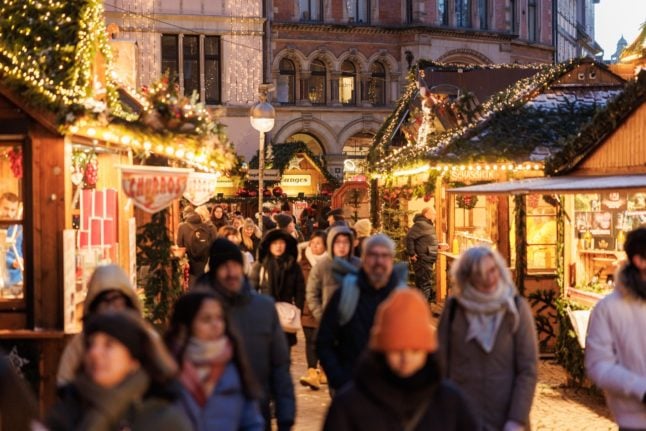 Speaking on Bayerischer Rundfunk Thursday, Lauterbach said he expected Covid infection numbers to rise again over the next weeks.

With Germany “likely at the start of a new winter wave”, Lauterbach said he could not understand states that had started to loosen their existing rules.

“It feels kind of like a bidding war to see which state can relax their rules first,” he said. “That’s just a little bit populist.”

Pointing to the some 1,000 people who continue to die each week after contracting Covid, Lauterbach said the existing rules were there to protect people who could not fully protect themselves.

Earlier this week, Bavaria became the second federal state to announce plans to scrap mandatory masks on local public transport, with state premier Markus Söder saying he was “convinced” that the rule could be phased out in either December or January.

The northern state of Schleswig-Holstein had already made a similar announcement earlier this month, with the mask-wearing rule due to end in the new year.

Speaking on Bayerischer Rundfunk, Lauterbach dismissed changes to the current restrictions as “reckless” and stressed that the Federal Health Ministry didn’t support plans to relax the rules.

Four states have also taken a further step towards liberalisation in recent weeks by ending the obligation to self-isolate after testing positive for Covid.

Under the current Infection Protection Act, only masks on long-distance transport, in clinics, and in care facilities are mandated on a federal level, while states are allowed to set their own mask-wearing rules on local public transport and in other public spaces.

While a handful of states look to relax their measures, top virologist Christian Drosten, who sits on the government’s panel of Covid experts, has signaled that the pandemic could soon be drawing to an end.

According to Drosten, the pattern of waves earlier this year show that increasingly small factors are enough to end a slew of infections. At the end of October, for example, a few weeks of summery weather broke the autumn wave entirely.

“The situation for the virus is becoming precarious,” Drosten told Die Zeit. “That is good. It is no longer the case that the virus could completely turn the game around with a few mutations.”

The Berlin-based virologist said he didn’t expect a more dangerous or deadly mutation of the virus to emerge in the coming months. 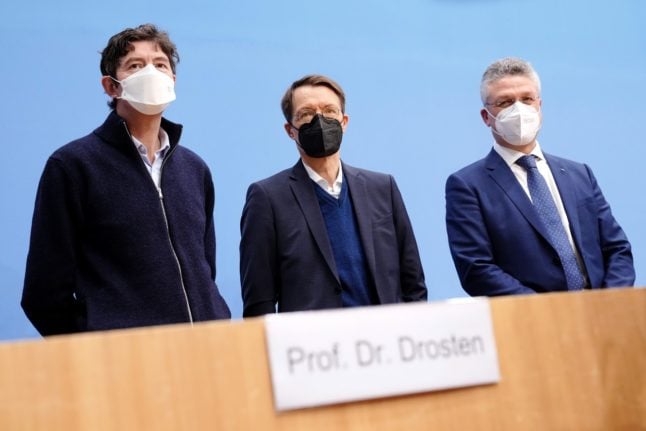 Nevertheless, Drosten warned that the winter could be “difficult” if the highly infectious BQ.1.1 subtype became the dominant variant.

Epidemiologist Klaus Stöhr agreed with Drosten’s assessment, telling Bild that the signs were pointing towards a transition from the pandemic to the endemic phase, largely due to the levels of immunity among the population.

New variants and mutations were bound to appear, he said.

“But that a variant appears that changes the clinical picture enormously or even worsens it and/or bypasses the acquired immune protection – we don’t see that happening!”

After falling steadily for a number of weeks, the 7-day incidence of Covid infections per 100,000 stood at 187 on Thursday, up from 178 the previous day.

This represents a slight drop from the previous week’s value of 199 and a significant decline compared to last month’s figure of 584.

However, experts say the incidence has become far less meaningful in recent weeks in light of the massive drop-off in testing – and particularly the negligible number of people who are taking PCR tests.

According to the latest report from the Robert Koch Institute, 1,566 people were hospitalised with Covid within 24 hours, while 164 people died after contracting the virus. 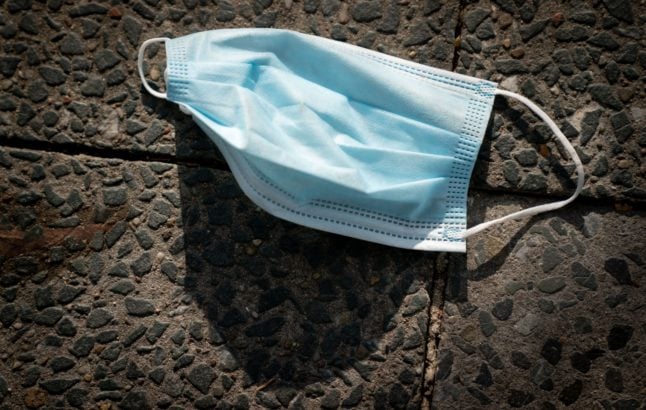 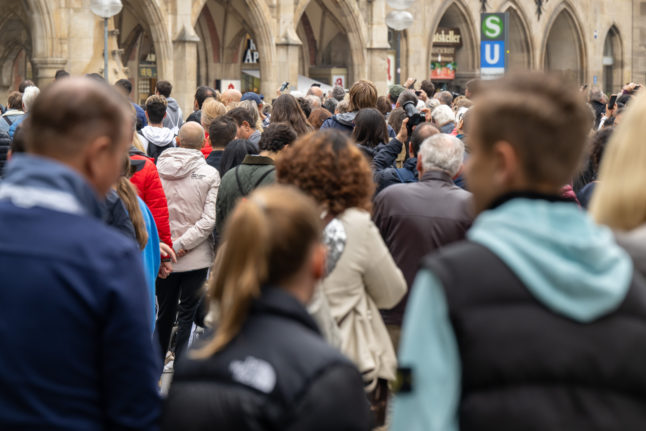 In the Robert Koch Institute’s view, the national spread of Covid-19 is currently tapering off.

In its weekly pandemic report, the RKI said it had noted a “certain easing” of the situation in Germany.

Public health officials estimate that between 700,000 and 1.6 million people in Germany were infected with Covid and showed symptoms of an acute respiratory illness in the past week, compared to between 1.1 and 2.2 million the previous week.

In 350,000 cases, a doctor’s visit revealed a respiratory disease in connection with a Covid-19 diagnosis. This is around 100,000 fewer than the week before.

The seven-day incidence of Covid infections also declined by about 16 per cent last week compared to three weeks earlier, the report added. In a sign that the worst of the autumn wave could have passed its peak, this trend was evidenced “in most federal states and in all age groups”.

However, it is currently difficult for health experts to predict whether the decline will continue in the coming weeks. Over the past few weeks, schools in several states have been closed for autumn holidays.

This could have had an influence on people’s contact with others and their testing behaviour, the RKI explained.

According to the RKI’s figures, the nationwide seven-day incidence is currently 464.1.

The value quantifies how many people were infected with the virus within one week among 100,000 citizens.

Over the past months, the Omicron BA.5 subtype has been the dominant variant in Germany. At present, it has almost entirely displaced all other variants, accounting for around 96 percent of all new infections.

But concern is growing over new sublines of BA.5 that appear to be spreading rapidly.

According to the RKI, the Covid sublines BF.7, BQ.1 and BQ.1.1 are gaining ground in Germany – though the overall number of infections still remains low. The latest samples suggest that BQ.1 currently accounts for just two percent of Covid infections, while BQ.1.1 accounts for just under three percent.

However, Moritz Gerstung from the German Cancer Research Centre in Heidelberg says the real figure could be more than twice as high. 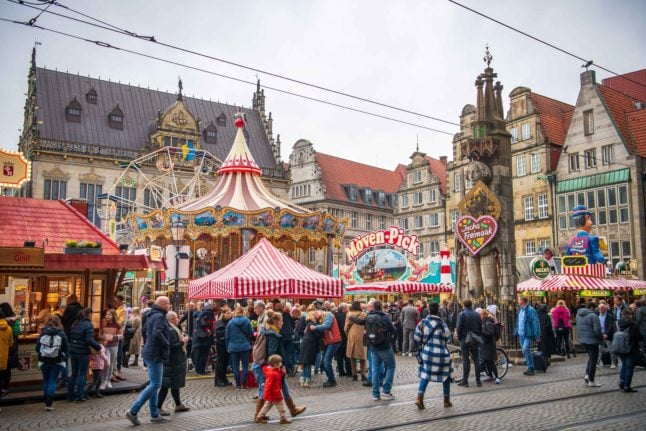 Visitors stroll around a fairground at the Bremer Freimarkt in Bremen. The autumn break saw a drop-off in infections. Photo: picture alliance/dpa | Sina Schuldt

Experts also disagree about how dangerous the spread of the new BA.5 sublines could be.

Recently, the European Centre for Disease Control (ECDC) issued a warning about the rapid spread of BQ.1 and BQ.1.1, which appear to be more resistent to the human immune response.

However, Carsten Watzl, Secretary General of the German Society for Immunology, estimates that the new subtypes will lead to an increase in infections, but not to an increase in the number of severe cases of the disease as a result of infection.

The spread of the new variants should be closely observed, but there is no need to take additional measures just yet, Watzl said.

In September, Germany started rolling out two new Omicron-adapted vaccines – including a Pfizer vaccine adapted to the BA.4 and BA.5 subtypes – in vaccine centres and GPs.

These adapted vaccines, which offer better protection against Omicron in particular, are now recommended for all booster jabs.