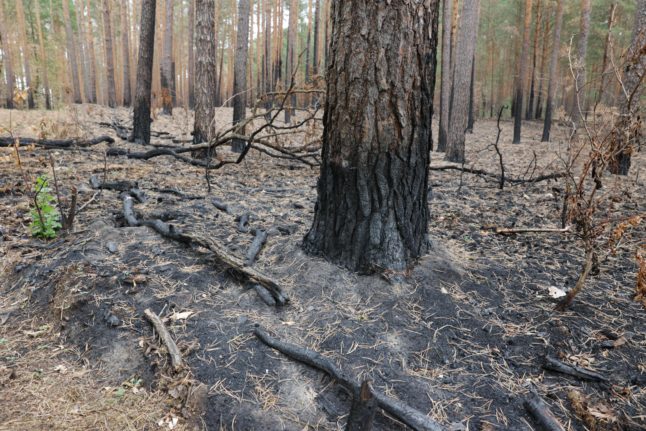 Germany recorded its worst bout of forest fires in 2022, and experts believe such calamities will only intensify in the coming years because of climate change.

Foresters are now racing to make the woods more resilient, including by giving Germany’s forests — known for its acres of evergreens — a complete makeover.

If they are successful, Germany’s forests will in the future no longer be populated primarily by rows of spruces, but by a mish-mash of tree species like oaks, aspens and lindens.

Walking through the tree skeletons in the dry woods near the town of Beelitz, forester Martin Schmitt peeled off the black bark of a tree, saying: “You can clearly see the charred tree trunks that have burnt down on the outside. If we look up now, we can already see a lot of brown crowns.

“Many, many trees are now dead, as we can see… And these trees will also not recover.”

In June and July, the fires that consumed 200 hectares (500 acres) of the forests in Brandenburg swept close to Beelitz town itself.

Across the state of Brandenburg where Beelitz is located, about 1,411 hectares were affected this year alone, about three and a half times as much as the annual average of the past 10 years.

Besides recurring drought, the monoculture composition of the forests has also made them more vulnerable.

For foresters, an urgent task at hand is to introduce diversity in the tree population.

“Forest transformation is the core work of my generation of foresters,” said Schmitt.

The patch of woods with charred trees will now be left alone for a while, to determine which trees might recover. In time, the plan is for deciduous trees to take over the space occupied by spruces that fail to regenerate.

A polyculture forest is generally more resistant to the consequences of climate change such as drought or pest infestation, the forester said.

Deciduous trees in particular release water into the air in a process called transpiration at a higher rate than conifers, and as a result, “the forest is ultimately much, much cooler and therefore the fire risk is much lower than in a pure pine forest,” said Schmitt.

Post-war Germany had turned to the rapidly growing spruces and pines to repopulate woodland stripped for energy and other necessities during the conflict. The conifers also proved valuable commercially as the manufacturing giant revived its economy.

But as the weather warms, the evergreens with their shallow root system are left gasping for water, and as a consequence, are unable to produce vital resin that helps protect them against insects.

In recent years, mass deaths of forests in iconic places such as the Harz mountain region where Goethe once hiked and composed odes to nature, have traumatised Germans, who see forests as a part of the national soul.

A desperate search for a cure is on, and the agriculture ministry has ploughed over a billion euros into reviving the country’s forests.

With its huge swathes of woodland, Brandenburg state began its shift away from monoculture evergreens in the 1990s but it is a task that takes decades.

Ironically, the recent acceleration in frequencies of forest fires may speed up the process.

A short drive away from the the tree skeletons, Schmitt pointed to a patch of spruce forest that burnt down in 2018.

“Three years later, we have trees there, some are more than six metres tall,” said Schmitt, pointing to the oaks and aspens that have naturally taken root. 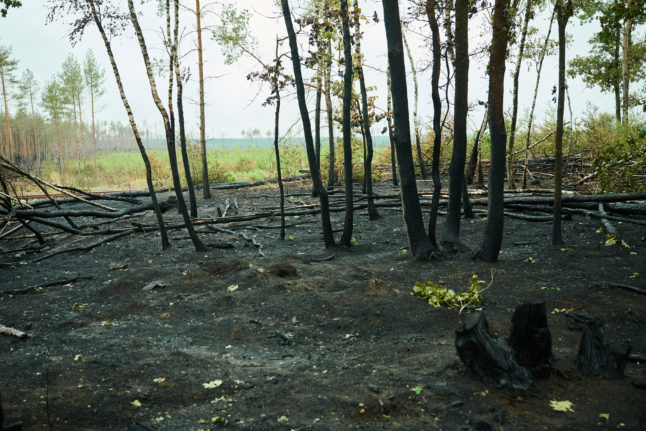 Dead trees in a stretch of forest near Treuenbrietzen, Brandenburg, that was hit by forest fires this year. Photo: picture alliance/dpa | Annette Riedl

“This is a natural forest development that sprang up in May 2019. In April 2019, it was all still completely brown — a complete desert, not a green leaf in the area,” he recalled.

Ingolf Basmer, an official at Brandenburg state’s forestry department, also said it was the right time to advance the forest transformation.

“We have to view it as an opportunity to develop multi-layered, diverse forest stands and not to fall back on the motto of ‘we do everything according to a pattern, uniformly’.”

He underlined the uncertainties of undertaking a transformation that could take decades to complete in an environment which is changing rapidly because of the climate crisis.

But he said there was no other option.

“We really have to start pushing this a bit so that we don’t waste time that we don’t actually have, even with these long time frames,” he stressed. 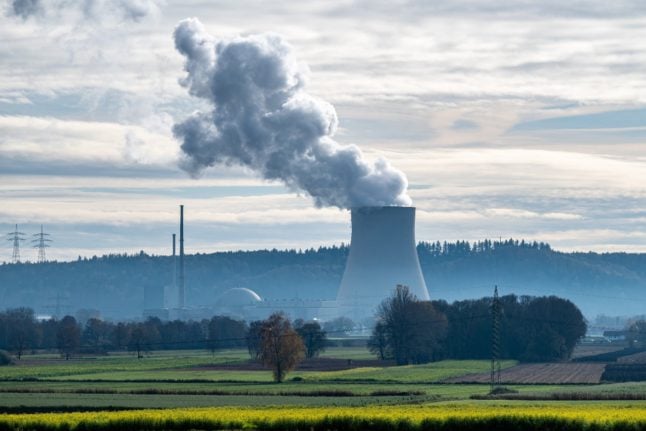 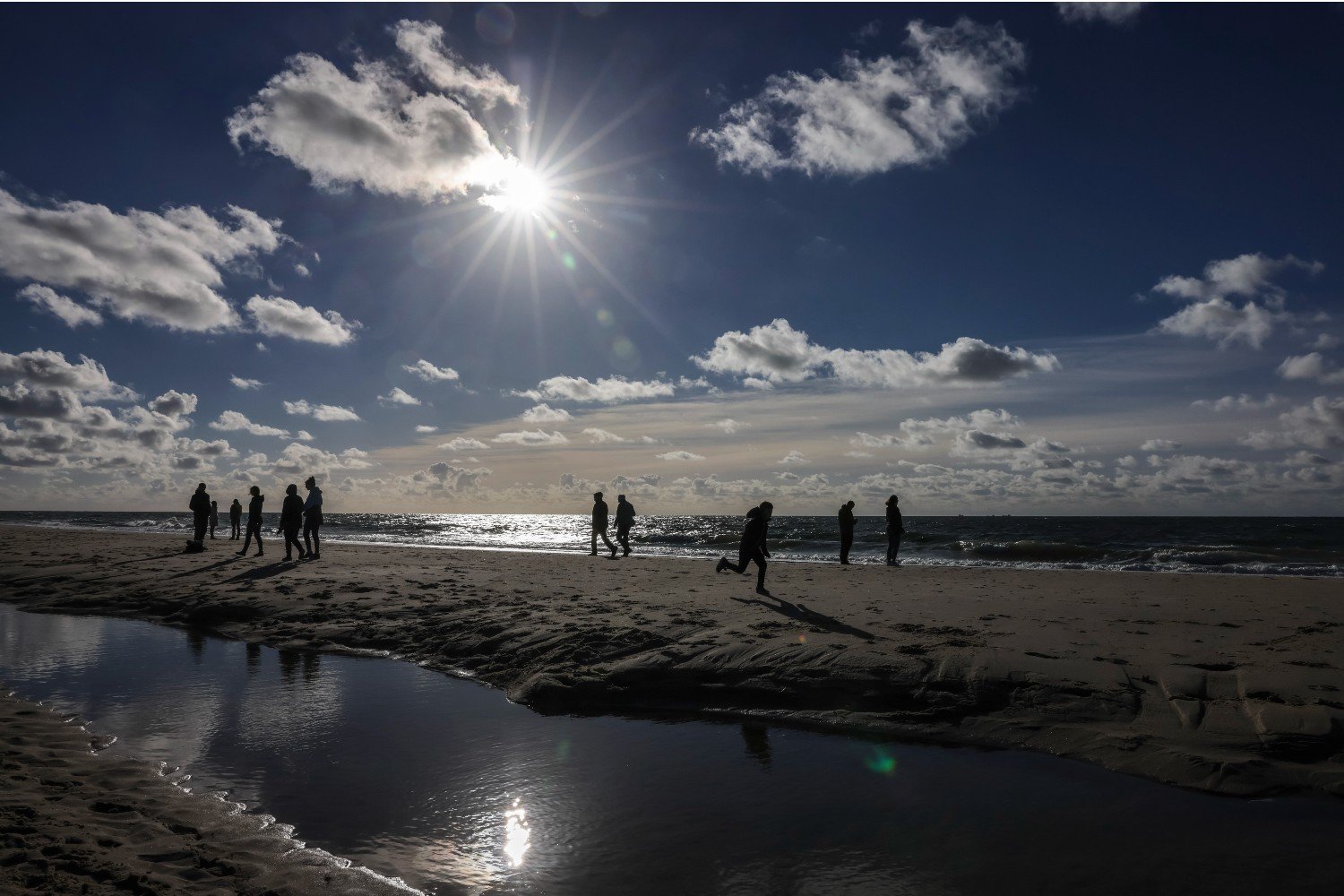 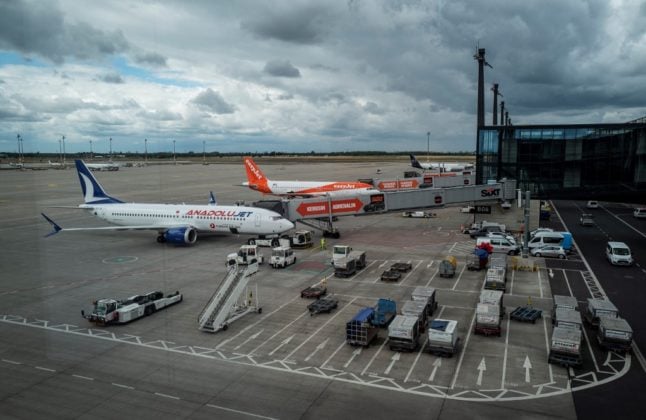 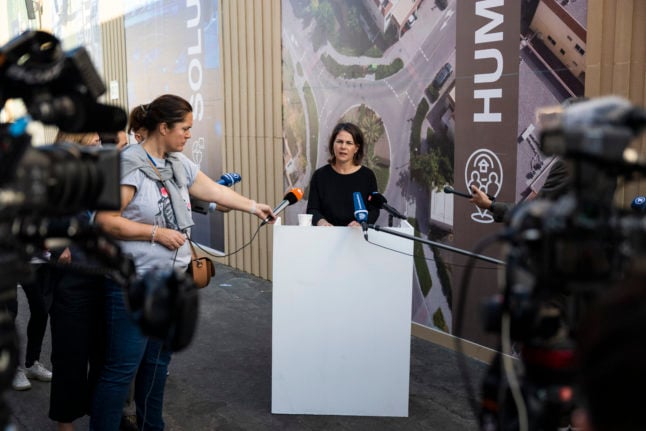