Speaking to the Funke Media Group on Thursday, Merz said the goal should be for society to return to normality after more than two years of pandemic restrictions.

“The time of high infection risk and severe disease progression is over,” he said. “With that, we should also try to return to a largely normal life as quickly as possible – including with corona.”

The CDU leader criticised the “almost siren-like alarmism” of Health Minister Karl Lauterbach (SPD), who has been in charge of setting Covid rules since the traffic-light coalition – made up of the Social Democrats, Greens and Free Democrats – entered government last year.

“We should return to normality and officially declare corona ended by spring next year at the latest,” he added.

On Thursday, the northern state of Schleswig-Holstein became the latest federal state to end mandatory isolation for people who test positive for Covid.

Bavaria and Baden-Württemberg had taken the same step on Wednesday, with compulsory masks and entry bans for nursing and care facilities taking the place of self-isolation rules.

Baden-Württemberg Health Minister Manne Lucha (Greens) has also advised people who test positive for Covid to avoid coming into their place of work while still infectious. 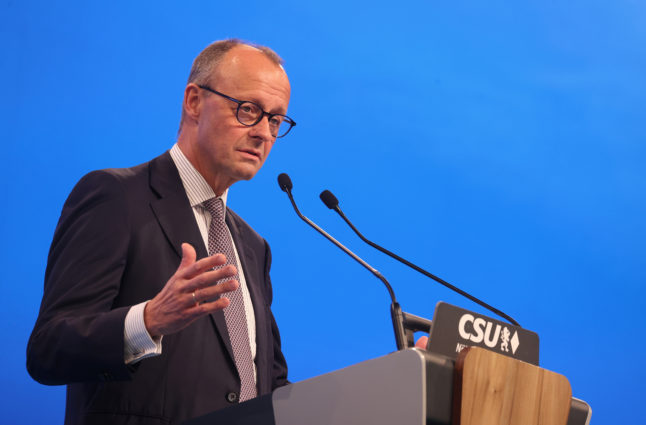 “Basically, if you are sick and have symptoms, you should also stay at home and take sick leave, just as before,” she said.

Alongside Schleswig-Holstein, Bavaria and Baden-Württemberg, the central state of Hesse also plans to end mandatory isolation for Covid patients, though the health ministry has not yet set a date for changing the rules.

Speaking to the Funke Media Group, Merz welcomed the news that the four states were relaxing their isolation restrictions, adding that Covid measures were only now needed “to a very limited extent” in Germany.

“When I first read the news, I felt a certain unease,” he said. “On further reflection, however, it seems to me to be responsible to proceed as Bavaria, Baden-Württemberg, Hesse and Schleswig-Holstein are now doing.”

But the decision of the four states to end their isolation requirements has been met with alarm by trade union representatives, who said they were “shocked” by the move.

Anja Piel, an executive member of the Deutsche Gewerkschaftsbund (DGB), said workers should continue to call in sick to work after testing positive for Covid-19 and should also voluntarily reduce their social contacts.

In the medical community, doctors also spoke out against the emergency of a so-called “patchwork” of Covid rules, with different measures applying in different states.

“All this suggests that politicians should now think about an orderly and uniform transition towards treating Covid like other endemic diseases, even if the World Heath Organisation has not yet declared the pandemic over worldwide,” Andreas Gassen, head of the SHI physicians’ organisation, told RND.

Since October 1st this year, a new, stripped-back version of the Infection Protection Act has been in force in Germany.

This mandates that masks are worn in health and care facilities and on long-distance public transport, but gives the federal states freedom to extend masks to local transport and other public venues as required.

Currently, each of the 16 federal states have some sort of mask-wearing requirement on local transport, but Schleswig-Holstein recently announced that it would be scrapping the measure at the end of the year.

The current legal framework for Covid-19 rules is set to expire on April 7th next year.

Whether or not to extend pandemic measures beyond this date is likely to be the subject of fierce debate.