EXPLAINED: What to know about Berlin's extended €29 ticket

Berlin is set to extend its reduced-cost public transport deal. Here's what you need to know, whether you live in Berlin or are visiting the capital.

What is the ticket anyway?

The offer allows people to use Berlin's local public transport network, such as buses, trams, the underground and S-Bahn network in the 'AB' service area for €29 per month.

The card is a follow-up to the Germany-wide €9 ticket that was in place across regional public transport networks in June, July and August - although it works in a different way (more on that below).

A regular monthly ticket in Berlin can cost anything from around €46 to €86, depending on the subscription or ticket. The Social Democrats in Berlin said it results in savings for people of €31 to €57 per month compared to a monthly AB ticket.

The €29 ticket, which was introduced in October, was to run until the end of December. But the Berlin Senate has announced it will carry on until at least the end of March 2023.

This was agreed by the Berlin governing coalition - made up of the SPD, the Greens and the Left Party - during talks on a supplementary budget in the Senate session on Tuesday November 1st.

"The €29 ticket will be extended until the end of March," Mayor Franziska Giffey (SPD) said after the meeting.

The Senate also announced plans for a special 'social ticket' in Berlin that will cost €9 a month and last until at least the end of March next year.

At the moment, Berlin's "Sozialticket" is €27.50 and is available to those who qualify for the Berlin Pass, including benefits claimants and asylum seekers.

According to the Senate, the group of those who qualify for the ticket will be expanded, so that around 650,000 people will be entitled to the new ticket for €9 a month. That would amount to one in six Berliners, regional newspaper the Tagesspiegel reported. School children already travel for free on the capital's buses and trains.

The total aid package from the local government to combat the energy crisis will amount to €2.6 billion, with the planned local transport concessions accounting for €500 million of this amount.

What if I'm already a subscriber or 'Abo' holder?

People with a subscription ticket automatically benefit from the promotion.

"The reduction of the fare to €29 for the months of October, November and December 2022 (which is now set to be extended), and the associated refund or settlement will be made automatically by the respective transport company holding the contract," Berlin transport operator BVG says.

"Your monthly debit amount will be reduced to €29; in case of subscriptions with annual payment, the respective difference will be refunded after the end of the campaign. Your VBB-fahrCard is valid as before."

A spokesman from the BVG told The Local that the details will "of course be updated with details about the current extension".

Can tourists visiting Berlin use it?

The €29 ticket is a an attractive offer - especially given that a standard 7-day ticket costs €36.

However, keep in the mind that the €29 ticket is a subscription. That means that it will run until the end of the promotional period at a cost of €29 per month. After that point, "the subscription contract for the selected fare product will run for a total of 12 months", according to the BVG, one of the transport operators in Berlin.

"Unlike the €9 ticket, the €29 special (deal) is not a new type of monthly ticket," a spokesman for BVG told The Local.

"It is a regular 12-month-subscription, but with a reduced price of 29 Euros/month for the months of October through December. (To be extended until the end of March as announced by the Senate).

"However, it is possible to end the subscription at the end of December (updates regarding the extension will be communicated)."

Furthermore, the spokesman added that it is currently not possible to get the ticket for the month of November.

"While we made it possible to start an October subscription until well into the month of October, for November, the usual deadlines applied," the spokesman said.

"Therefore, at this very moment, you cannot start a subscription for the month of November. Your earliest start would be December. We a working on a solution for those who want to start their subscription earlier."

Can it be used across Berlin and Brandenburg?

One of the drawbacks of the €29 travel card is that it is only valid in Berlin's AB zone, which includes the inner city and most of the suburbs. It means, though, that the C area - which includes the BER airport and Potsdam, Brandenburg's capital, are not covered.

This is the case because the Berlin and Brandenburg government were not able to reach an agreement on a public transport ticket.

If you have the €29 ticket and want to travel to the airport for example, you need an 'add-on' ticket to do so. 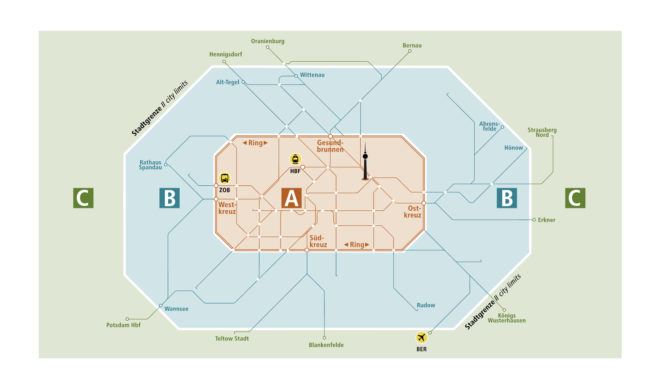 The graphic shows the ABC zones in Berlin. The €29 ticket is for the AB zone. Screenshot: BVG

What about the €49 nationwide ticket?

As The Local has reported, there are plans for a Germany-wide successor to the €9 ticket, which is likely to cost €49 per month.

Berlin mayor Giffey said that it isn't clear that the €49 ticket will be introduced in January as originally planned, but may come later.

Giffey said she thought the ticket could come in April instead.

Berlin Transport Senator Bettina Jarasch (Greens) described the Berlin €29 extension as a "bridge solution" until the nationwide ticket comes on the market.

In the meeting, the SPD had pushed to extend the €29 ticket until the end of 2023, but was unable to get its way - at least for now.

Jarasch is now tasked with negotiating what happens from April in Berlin.

It is likely that the state premiers will agree on a nationwide standard ticket this week. After this is agreed, Jarasch is to sound out the possibilities for the future in the Berlin-Brandenburg Transport Association (VBB) area.

For more information on where to sign up for the ticket, check out the the BVG website.

UPDATE: 'Deutschlandticket': What you need to know about Germany's new €49 ticket