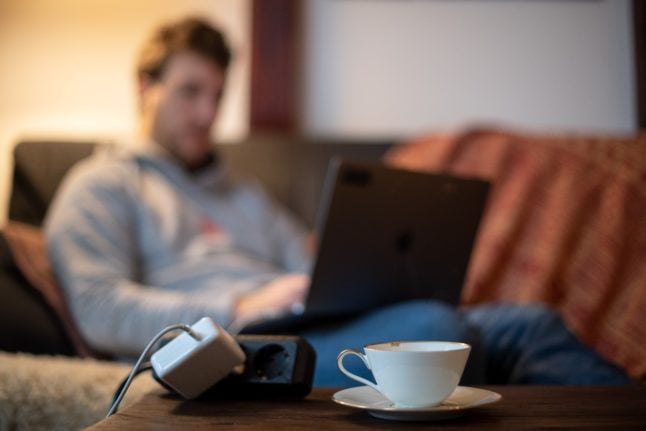 A man works on his laptop at home. Photo: picture alliance/dpa | Sina Schuldt

“The relief for electricity prices must begin in January at the latest,” Economics Minister Robert Habeck (Greens) told Handelsblatt on Monday.

“That is what we are aiming for.”

Habeck is the latest political heavyweight to air his support for an early start to the electricity price brake, with the leaders of the federal states and Finance Minister Christian Lindner (FDP) also calling for relief to start next year.

On the advice of an expert panel, the traffic-light coalition had originally planned to bring in a cap on gas prices from March 2023. This would grant households a certain allowance of subsidised gas – equivalent to 80 percent of the previous year’s usage – which would be capped at 12 cents per kilowatt hour of energy.

To support the economy over winter, the government is also planning to cover the December gas bill for households and small- to medium-sized businesses.

Electricity prices, which are heavily affected by price hikes on the gas market, will also be subsidised by the state. This now looks set to come in two months earlier than the cap on gas prices.

But critics of the plans – including the opposition CDU – say support with gas bills as well as electricity bills should be extended through the coldest winter months of January and February.

However, ministers are still unsure whether bringing the gas price cap forward to January is “technically possible”, Lindner added.

In order to implement the planned gas price cap, suppliers will need to calculate 80 percent of a household’s previous energy usage and charge the difference between the market prices and the capped price to the state.

According to chairman of Mining, Chemical and Energy Industries Union Michael Vassiliadis, suppliers are likely to implement this alternative payment structure at different speeds. This could lead to different regions or households receiving relief at different times if the gas price brake is brought forward, he told Deutschlandfunk.

At a meeting of federal and state leaders on Friday, North Rhine-Westphalia’s state premier Hendrik Wüst (CDU) was among the voices urging the government to provide more energy relief in January and February.

“Private households and businesses need uninterrupted support,” Wüst told DPA. “It would be wrong for the traffic light government to stall over the winter.”

His comments were echoed by Jens Spahn, the vice chairman of the CDU/CSU parliamentary group.

“For bakeries, too, for craft trades, there needs to be structural relief much earlier, in January, February, March,” Spahn told ARD.

He said the government could offer lump sums to low-income households and businesses at risk of insolvency if the energy price break couldn’t be brought in sooner.

Over the weekend, Chancellor Olaf Scholz (SPD) said he wanted to explore an earlier start date for the gas price brake on January 1st and discuss this with the energy suppliers.

The government could not decide this and then the utilities say, “but it won’t work, we won’t do it”, Scholz said on Saturday. “This will only succeed in a great closing of ranks in Germany. And that’s what we’re organising right now – to discuss the questions of how to do it.”