German president arrives in Kyiv amid rebuilding talks in Berlin

German President Frank-Walter Steinmeier arrived for a surprise visit in Kyiv on Tuesday as a conference on reconstructing Ukraine kicked off in Berlin.

The trip is his first to the country since Russia invaded Ukraine in February, and came six months after Steinmeier, then under heavy fire for his years-long detente policy with Moscow, was snubbed by Kyiv.

The president also had to abort a trip at the last minute last week over security reasons, sparking criticisms from Germany's opposition.

"I am looking forward to my meeting with (Ukrainian) President Volodymyr Zelensky in Kyiv," he said, according to a confirmation sent by his spokeswoman.

Before meeting Zelensky, Steinmeier will visit a town in the north of the country, near the Belarusian border, which Ukraine says has been liberated from Russian troops but left with its infrastructure destroyed.

Steinmeier will provide aid to the municipality for its energy infrastructure, he said.

"My message to Ukrainians: you can count on Germany", Steinmeier said.

In the months after Russia invaded Ukraine, Steinmeier, a former foreign minister, was heavily criticised over his years-long rapprochement stance towards Moscow, which he has since admitted was a mistake.

His offer to visit Kyiv in April was snubbed, sparking irritation between the two countries.

Chancellor Olaf Scholz then said Kyiv's refusal to receive Steinmeier was a barrier to his own visit to Ukraine -- which eventually only took place in June along with Italy's Mario Draghi and France's Emmanuel Macron.

Steinmeier, a Social Democrat serving his second stint as German president, was a foreign minister in two of former chancellor Angela Merkel's governments.

He has been a leading advocate of the "Wandel durch Handel" (Change through Trade) concept, which argues that fostering close commercial ties can help spur democratic reforms.

Steinmeier also championed the controversial Nord Stream 2 gas pipeline between Russia and Germany, which has now been halted over Moscow's aggression in Ukraine.

But he has since admitted that his detente approach towards President Vladimir Putin had been misguided, and that there could be "no return to normal with Putin's Russia".

Zelensky was meanwhile due to address a reconstruction conference in Berlin via video-link.

Scholz and EU chief Ursula von der Leyen called for a "Marshall Plan for Ukraine" in a joint editorial published Monday in the Frankfurter Allgemeine Zeitung.

Opening the conference in Berlin on Tuesday, Scholz said rebuilding Ukraine was a "generational task" that must start immediately, even as Russia's invasion rages on. 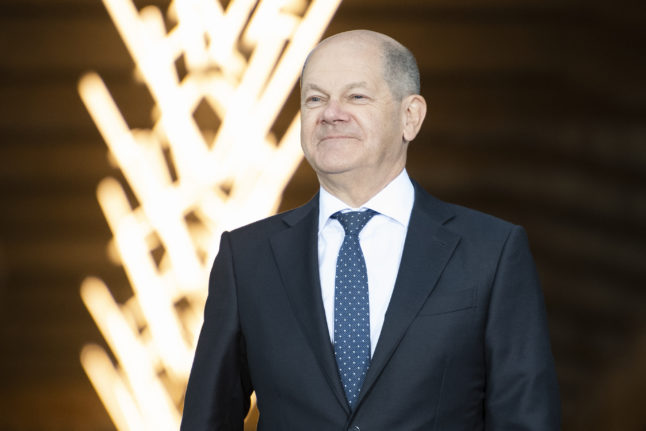 "What is at stake here is nothing less than creating a new Marshall Plan for the 21st century -- a generational task that must begin now," Scholz said as he opened an international reconstruction conference for Ukraine in Berlin.

Scholz said that rebuilding Ukraine marked a "challenge for generations" but one that also provided a chance to modernise its infrastructure.

The task is "one that will require the combined strength of the entire international community but it is also an opportunity for generations to come if we get it right", he said.

Speaking at the same event, European Commission chief Ursula von der Leyen called the scale of destruction in the war-ravaged country "staggering", with the World Bank estimating the toll of the damage at 350 billion euros ($345 billion).

"This is for sure more than one country or one union can provide alone," she said. "We need all hands on deck."

He appealed to international supporters to cover his country's $38-billion budget hole for 2023, saying such assistance was essential if Ukraine is to get back on its feet.

"At this very conference we need to make a decision on assistance to cover the next year's budget deficit for Ukraine," he said. "For Ukraine it is a very significant amount of money."