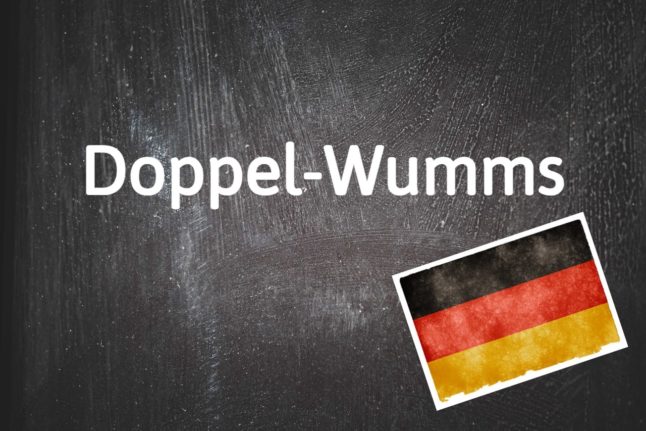 Why do I need to know Doppel-Wumms?

Because it’s an expression that’s been splashed all over the German media in recent weeks and is a brilliant illustration of how political slogans and colloquialisms can enter into common parlance.

To understand the meaning of Doppel-Wumms, it’s worth looking at the meaning of Wumms more generally. The word – which is pronounced like this – is onomatopoeic, which means it sounds like what it signifies.

You can think of Wumms as similar to the English “boom” or “bang”, which describes a loud noise or thud. More figuratively, it can describe a powerful gesture or event that makes a big impact: think of phrases like “going out with a bang” or “giving it some oomph”. To do something “mit Wumms” is to do it energetically and forcefully – with oomph, in other words.

With that in mind, “Doppel-Wumms” can be thought of as something of a double-whammy: it’s a disruptive event or action that is perceived to have double the impact.

Most recently, it was used by Chancellor Olaf Scholz (SPD) when he announced a whopping €200 billion relief package to support households with the rising cost of living.

Though Wumms is a fairly well-known colloquialism, Doppel-Wumms appears to be have been Scholz’s own invention.

He’s likely to have been riffing on his use of the word Wumms when, as Finance Minister, he announced more than €100 billion of financial support to see the country through the Covid crisis.

In June 2020, Scholz declared that Germany would come “mit Wumms aus der Krise” (out of the crisis with energy, or oomph). This thrust the word into a fairly new political context: in Scholz’s lexicon, Wumms has become synonymous with a fairly hefty cash injection from the government.

In fact, in Scholzonomics, Wumms can even be seen as a new monetary unit. One Wumms is equivalent to €100 billion, while a Doppel-Wumms equates to €200 billion.

The ‘Double-Whammy’ is a source of relief for many people in difficult times.

Will the government’s ‘Double Whammy’ be enough to solve the energy crisis?