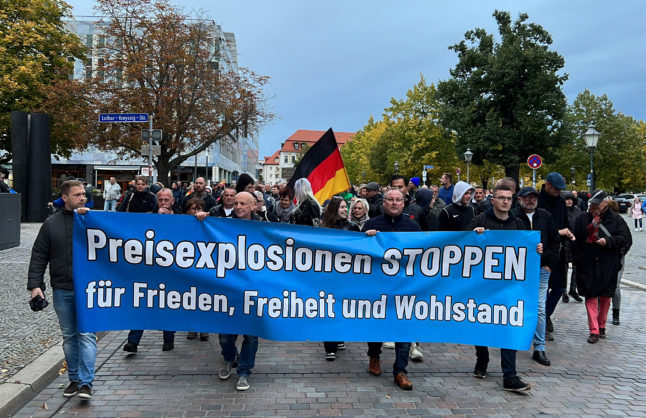 Ahead of the federal-state consultations on Wednesday, state premiers have been calling for further relief from the federal government.

The measures taken so far are not enough, Lower Saxony’s head of government Stephan Weil, of the Social Democrats, told German daily newspaper Welt. He said the impact on many sectors affected by the energy crisis has not been addressed.

“This applies to the business sector, but also to other important areas such as hospitals, public utilities or public transport,” he said.

Bremen’s head of government, Andreas Bovenschulte (SPD), called for an energy price cap – which Germany has been debating over the last week – to come into force immediately.

READ ALSO: Why Germany could scrap gas levy plans and bring in a price cap

“People need security as quickly as possible in uncertain times,” he said. “They need to know what is coming and what they can and must prepare for.”

“Electricity prices must fall significantly and be based on manufacturing costs,” he told Welt. “Fuel prices must be synchronised with crude oil prices again.”

Among the headline measures are one-off payments to millions of pensioners and a plan to skim off energy firms’ windfall profits.

There are also proposals for a follow-up to the hugely successful €9 public transport summer deal – touted to cost €49 per month – if the 16 states co-finance it.

However, some of Germany’s regional politicians say they are concerned about the impact on state finances.

Hamburg mayor Peter Tschentscher (SPD) said the relief measures planned by the government would have a considerable impact on state budgets.

“Many (regions) will be overburdened because additional strain will be added from taking in refugees or a successor regulation for the €9 ticket. This is where financial compensation measures from the federal government could come in.”

“I firmly expect the heads of the states to act responsibly at the conference of state premieres on Wednesday, to constructively support the federal government’s measures and to effectively implement them quickly within their jurisdiction so that the money reaches people,” she told the Funke-Mediengruppe.

Esken said questions on details could be clarified, adding: “But if we want to maintain social cohesion in Germany, we need to provide support quickly, accurately and effectively.”

A number of protests have been taking place in Germany amid the energy crisis, signalling growing unrest.

On Monday more than 11,000 people protested against government policies in about 20 locations in Mecklenburg-Western Pomerania.

According to police in Schwerin, about 4,500 people took to the streets against the consequences of the energy crisis and high inflation.

Placards were directed primarily against the policies of the federal government as it tries to deal with the energy crisis triggered by Russia’s war on Ukraine. Protesters demanded a rollback of sanctions against Russia, and for the Nord Stream 2 Baltic Sea pipeline to be opened in order to provide gas for Germany.

Demos also took place in other parts of the country including Leipzig and Magdeburg.

READ ALSO: Germany has failed to do its energy ‘homework’ and now faces years of catching up

Chief executive of the German Association of Towns and Municipalities, Gerd Landsberg, said the relief package was needed urgently.

“The third relief package worth more than €65 billion is an important building block for getting us through the crisis,” he said. “The package must not be allowed to fail. People in Germany are waiting for these important signals.”

“Germany is experiencing a multitude of crises on a scale we have not had since World War II,” he said, referring to war, inflation, refugees, energy supply, staff shortages and disrupted supply chains.

“The federal, state and local levels must work much more closely together,” he said.