A stethoscope on a table at a GP's surgery. Photo: picture alliance/dpa | Frank Rumpenhorst

In the aftermath of the Covid pandemic, Germany is struggling to fill a large gap in its healthcare reserves.

Lauterbach says this is largely due to the generous spending policies of the previous government both before and during the Covid crisis. As well as pouring billions of euros into free tests, the healthcare system was overwhelmed by patients during the most severe waves of the pandemic.

To tackle this shortfall, the Health Ministry has drafted a set of proposals for raising additional funds.

One of these proposals is to increase the level of health insurance contributions that people have to pay each month. The funds raised from this would account for around 10 percent of the total rescue package.

How much more could people have to pay?

Lauterbach has pitched a 0.3 percent rise in monthly contributions. This would be added to the so-called additional contribution, which is currently set at a maximum of 1.3 percent, on top of the 14.6 percent general contribution that is paid as standard.

For people in employment, contributions are divided equally between the employer and the employee. That means the extra 0.3 percent would translate to 0.15 percent extra per month in reality.

Self-employed people – who generally have to bear the full brunt of the health insurance costs themselves – will fare a little worse under the plans. They’ll be expected to shell out €3 extra per month for every €1,000 of gross profit.

Would everyone have to pay this much?

No. Firstly, the changes would only affect those who are registered with one of the statutory health insurance companies such as TK or AOK. People who are privately insured will continue to pay the contribution set by their insurer.

Secondly, unlike the general contribution of 14.6 percent, statutory insurance funds have the option to decide how much of the additional contribution they want to charge.

That means that, while 1.6 percent could become the new maximum, there’s no guarantee that companies will choose to charge this. Depending on their financial situation, they may decide to keep the additional fees lower to remain competitive, or alternatively hike the fees to the maximum in order to shore up their reserves or offer better services.

In other words, people will still pay a minimum contribution of 14.6 percent of their income but could pay a maximum of 16.2 percent (assuming that their health insurance company chooses to charge the full additional contribution). Most will pay something in the middle.

READ ALSO: Reader question: How can I change my German health insurance provider? 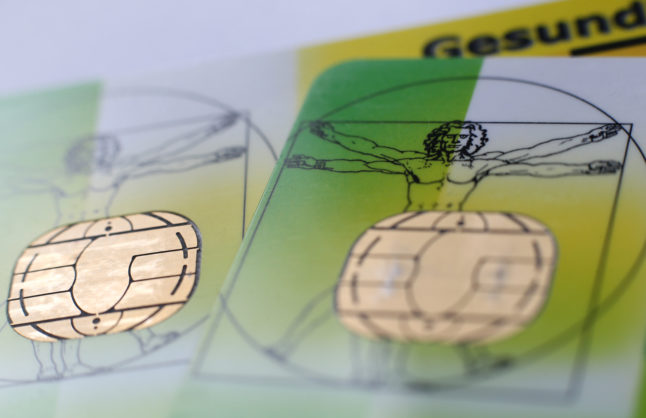 What other plans are on the table?

As we mentioned, raising health insurance contributions is likely to cover just a small fraction of the deficit. To cover the rest, Lauterbach is proposing a range of other measures, including:

In 2023, the federal government will step in with increased funding for the health insurance funds. Instead of the usual spending of €14.5 billion per year, the traffic-light coalition will shell out €16.5 billion on topping up the healthcare funds next year and will also provide a further €1 billion in the form of an interest-free loan.

Statutory health insurance companies will have to dig into their savings to the tune of €4 billion to help cover the deficit. At the same time, €2.4 billion will be taken out of a pool of money known as the ‘Health Fund’ (Gesundheitsfond), which is built up through a combination of health insurance contributions, taxpayer funding and other forms of insurance such as pensions insurance.

Under German law, pharmaceutical companies are required to provide statutory health insurance companies with a discount of at least seven percent on certain types of medicine. This will be hiked to 12 percent for one year. 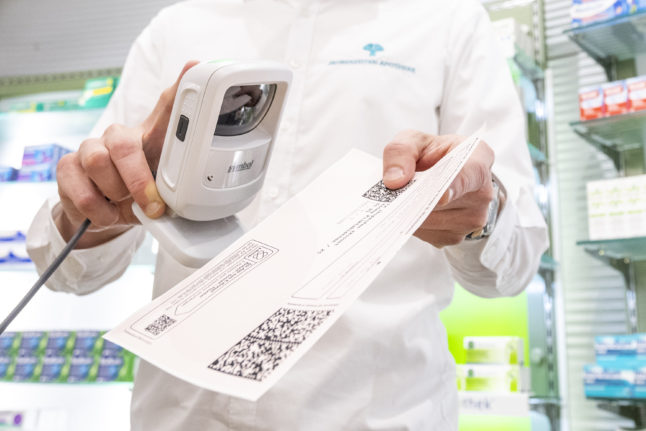 Furthermore, pharmacies will be required to provide the insurance funds with a discount of €2 (rather than the previous €1.77) per packet of prescription drugs. This will last for at least two years. Meanwhile, a moratorium on raising the price of medicines will be extended to 2026.

Restrictions on bonuses for doctors

Doctors’ surgeries will no longer be given financial incentives for taking on new patients.

Is this all set in stone?

Not yet, although it is likely to be passed in a parliamentary vote. So far, the cabinet has already waved through the changes, and on Friday they were debated for the first time in the Bundestag.

In a seething speech in the Bundestag on Friday, Bavaria’s state health minister Klaus Holetschek (CSU) criticised Lauterbach’s plans to raise health insurance contributions, arguing that it would “send the wrong signal” to patients.

He also laid into the proposals to cut doctors’ bonuses for taking on new patients, arguing that this would lead to a cut in services.

However, the FDP health expert Andrew Ullmann said Lauterbach’s plans could help to avoid a hike in contributions that could cost people hundreds of euros per months. “That would not be responsible in times of inflation and energy crisis,” he said. 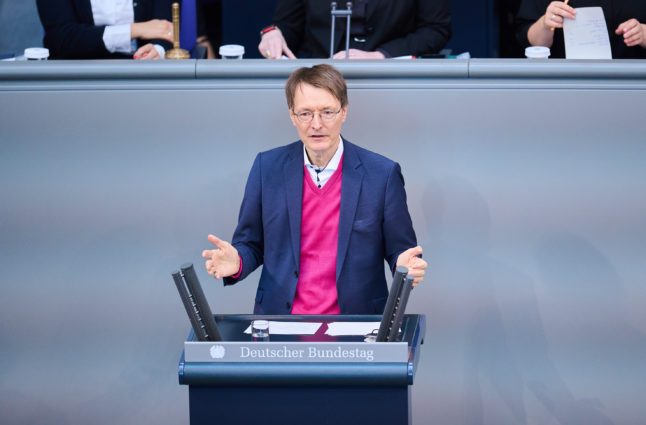 Health Minister Karl Lauterbach (SPD) speaks at a debate in the Bundestag on the measures to bail out the health insurance funds. Photo: picture alliance/dpa | Annette Riedl

Pointing to his proposals to shift some of the financial burden onto pharmaceutical companies, the SPD politician said he would “stand up to lobby pressure” and refuse to change course.

The German Interdisciplinary Association for Intensive Care and Emergency Medicine (Divi) said on Thursday that there was a “catastrophic situation” in children’s intensive care units.

According to the physicians, a wave of respiratory syncytial virus (RSV) infections can be expected every year starting in the autumn.

Yet this year “there are fewer and fewer pediatric hospital beds available overall” as well as a lack of nursing staff, Divi Secretary General Florian Hoffmann explained Wednesday on ZDF’s Morgenmagazin.

Because all beds were full in one case, a child was transferred from the Hannover Medical School (MHH) to Magdeburg on Friday night, a distance of around 150 kilometers.

The child, who was about one-year old, had an RSV infection, which can be life-threatening, especially for babies and children with pre-existing conditions.

READ ALSO: 7 things to know about visiting a doctor in Germany

Some health experts have said that hospitals are now filled to capacity because children had minimal social contact during the pandemic and are now catching up on infections.

According to the Robert Koch Institute (RKI), an estimated 5.6 severe cases of RSV respiratory illness occur worldwide per 1,000 children in the twelve months after birth.

In the wake of protective measures against Covid-19, however, many such infections had temporarily failed to materialise.

According to Divi, hardly any clinics had a free crib or free pediatric intensive care bed in the past few days.

“Children have to lie in the emergency room for days,” Hoffmann said.

Yet the peak of the current wave of respiratory infections in children has by no means been reached, Hoffmann said. “The situation in practices and clinics will get even worse in the coming weeks.”

“We are at the breaking point,” said Matthias Keller, head of the Children’s Hospital Dritter Orden Passau already. The rooms are often double-occupied, he said. In some cases, there were too few monitors and not enough equipment for respiratory support.

“Some patient rooms are like bed storage areas, where you really have to crawl over the beds to get to the sick child, because the parent bed is lined up with the patient bed,” said Keller, who is also chairman of the South German Society for Pediatric and Adolescent Medicine.

This has far-reaching consequences for other young children who need treatment. When an infant who has just been resuscitated is admitted to a children’s hospital that is actually fully occupied, a three-year-old has to wait there for the third day in a row for his urgently needed heart operation.

A wave of infections usually lasts six to eight weeks. In Bavaria, Lower Saxony and Berlin, as well as North Rhine-Westphalia, clinics are reporting a “maximally tense situation,” reported Divi on Thursday.

The Düsseldorf University Hospital, for example, is experiencing a wave of influenza among its young patients in addition to the RSV wave, which is “causing massive problems primarily for children up to elementary school age,” said University Hospital spokesman Tobias Pott.

In the Rhineland, “all beds are completely full” at times, said Jörg Dötsch, president of the German Society for Pediatric and Adolescent Medicine. An ER waiting time of six to seven hours is not uncommon, he says.

“It is very unpleasant when children and their families have to virtually camp out in the emergency room,” says Dötsch, who is also director of the Clinic for Pediatric and Adolescent Medicine at the University Hospital in Cologne.

READ ALSO: Healthcare in Germany: How to get a faster appointment with a specialist doctor

What are the solutions?

One solution may be to temporarily bring nursing staff from adult facilities into the children’s hospitals, says Hoffmann, who is also a senior physician at Dr. von Hauner’s Children’s Hospital at the University of Munich.

But above all, he says, many more pediatric nursing staff need to be trained. “We need to strengthen nursing,” he explained. “Only then do we have a chance.”

Others said more money needed to be invested in pediatric medicine and vaccines, even if it is less profitable.

“The fact that children’s lives are currently in danger is the responsibility of politicians,” said Jakob Maske, spokesman for the Professional Association of Pediatricians and Adolescents.

“Nowadays medicine has to be profitable – not cure diseases, but make money.”

READ ALSO: How private investors are buying up healthcare practices in Germany