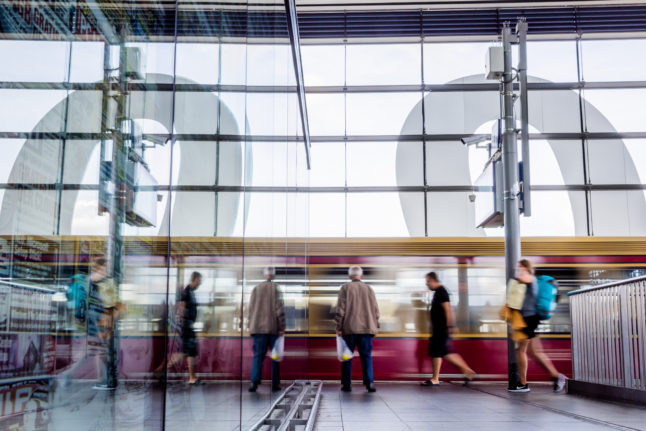 An S-Bahn train in Berlin on the last day of the €9 ticket. Photo: picture alliance/dpa | Christoph Soeder

The €9 ticket, which allowed passengers to use local public transport in Germany – including regional trains – during summer has been widely touted as a success story.

It was brought in to help ease the pressure on consumers facing rocketing energy prices and the rising cost of living.

According to the Association of German Transport Companies (VDV), 52 million tickets were sold between June and August. Meanwhile, more than 10 million people who already had transport cards – known as Abos in Germany – are meant to have received the discount automatically.

However, many loyal customers who have subscription tickets may have not yet benefited from the campaign.

This is the case for some passengers with yearly tickets in the Berlin and Brandenburg area.

A spokesman from Berlin’s BVG said that customers with a yearly Abo subscription would receive their refund now that the three-month campaign was over, but that it would take some time.

“This decision (to refund after the campaign ended) was made by all transport operators within the Verkehrsverbund Berlin-Brandenburg (VBB) for technical reasons – otherwise, things would have gotten extremely complicated in case e.g. someone ended his or her Abo within the three months,” the spokesman told The Local.

“The refunds have started. However, due to the number of customers with a yearly Abo (around 125.000 at the BVG alone) they cannot be sent out on a single day. They are to be completed by the end of September.”

The amount that people will be refunded depends on the subscription and which fare zones are included.

It comes as Berlin is proposing a regional €29 regional ticket from October, ahead of the plans for a new nationwide follow-up to the €9 offer.

The details on the Berlin (and possibly Brandenburg) ticket are still being thrashed out, so it is unclear how it will affect subscribers.

For an idea of what’s going on in other large transport authorities, the Local asked the transit authority for the city of Munich (The Münchner Verkehrs und Tarifverbund or MVV) if they had refunded subscribers.

A spokeswoman told us: “The approximately 470,000 subscriptions (including holders of the 365-euro ticket for students and trainees) in the MVV area were automatically converted into €9 tickets.

“Only holders of semester tickets had to contact the transport company (Deutsche Bahn/DB or Münchner Verkehrsgesellschaft/MVG) where they bought their ticket for a refund.”

What should I do if I haven’t received a refund?

Depending on where you live and the type of ticket you have, you may not yet have benefited from the €9 ticket offer. The first thing to do is to check the website of your local transport company to see if there is information.

Although many firms are offering automatic refunds to subscription ticket customers, some may require people to take action themselves.

If you have any questions or doubts, you should contact the company or visit a travel hub to ask a member of staff what you should do.

Travelling across Europe by train is quickly becoming the preferred mode of transport for many people – mostly due to environmental concerns.

For others though, making the switch from cars or planes to trains is not so simple.

With planes, there are well-known websites like Skyscanner and Expedia, which makes it easy to find cheap flights. As well good connections across the continent from most major airports.

Then there is the convenience of travelling by car, which can be hard to beat – especially for those living in more rural areas.

So what are the options for trains? Are there websites like Skyscanner but for train travel? And where can you find cheap tickets or the best routes?

Here are the websites you need to know when planning a trip across Europe by train.

The Seat 61 website provides tips on how to travel comfortably and affordably by train, while aiming to help visitors to rediscover the “pleasure, romance  and adventure of the journey”.

It includes an introduction to train travel in Europe, as well as an extensive search feature to find trains by starting location.

For example, The Local searched for trains from Salzburg to Italy and found routes to Venice, Milan, Florence, Rome and Naples, including on Nightjet sleeper trains.

The guide then describes the features of the Nightjet service, such as air conditioning, showers and room service – all useful information for any newbies starting out with train travel.

Seat 61 is run by Mark Smith, a train enthusiast and former manager at the UK Department of Transport.

READ MORE: Discover Austria: 19 ways to make the most of autumn this year

The Trainline is an international platform focused on train travel. The company is based in the UK but has extensive coverage of train travel in 45 countries across Europe.

The aim of the Trainline is find to the cheapest tickets for a selected route. Most of the time, this means booking in advance.

The site also highlights some great offers, such as €7 tickets between Barcelona and Madrid, and Paris to Amsterdam from €20.

As an added bonus, the search function on the Trainline is very user-friendly and allows people to search by location, as well as add extras such as railcards or return tickets.

The Trainline can be accessed via the website or app.

Rail Europe is a leading distributor of European train tickets. The website covers 25,000 destinations and 11,000 routes across the continent.

The search function on Rail Europe works in a similar way to other websites and users can view tickets by destination to get the best price. It’s also possible to purchase railcards direct from Rail Europe.

Additionally, the site includes a useful overview of the latest ticket releases and sales, such as special offers on journeys between Paris and Geneva.

Users can pay for tickets in Euros, Sterling or Dollar (US, Canada and Australia) on the website or the app.

Rail Europe is headquartered in Paris but was founded in New York in 1932.

The Interrail Pass is a railcard that is available for residents in Europe. For people that live outside of Europe, they can purchase the Eurail Pass.

The passes are aimed at backpackers, or anyone spending time travelling across Europe.

The Interrail website has details about the different passes on offer under the umbrella of Interrail, like the Global Pass, One Country Pass and the German Rail Pass.

Whereas the Global Pass starts at €251 for seven days of train travel in one month, but goes up to €677 for a three month unlimited travel ticket.

Interrail or Eurail Pass holders can buy tickets and make reservations via the desktop website or the Rail Planner app.

Omio is a travel platform where you can book train, bus and flight tickets. It has a free app to download or users can search and book on the website.

The Omio site has a dedicated section just for train travel. It even highlights 28 routes in Europe that are faster by train than plane – as well as the amount of carbon dioxide saved on the trip.

Examples are London to Brussels, which takes just two hours, or Frankfurt to Cologne in one hour.

There is also a handy FAQ section with information about booking train tickets in Europe, baggage conditions and travelling with pets.

At the time of writing, The Local found a ticket from Zurich to Vienna on Omio for €60 (when searching for dates two months in advance).

Do you have other suggestions for websites we should add to this list? Let us know in the comments section below or email [email protected]