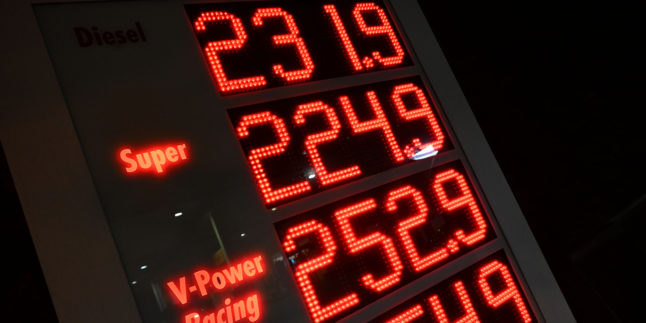 The price of premium gasoline and diesel is displayed on September 1st in Munich. Photo: picture alliance/dpa | Felix Hörhager

The cost of fuel in Germany has risen significantly and is now higher than in all directly neighbouring EU countries, according to the Federal Statistical Office.

According to the report, the price differences compared with other countries amount to an average of up to 69 cents per litre.

In the three months of the fuel discount from June to August, however, fuel prices in Germany had been at or slightly below the price level of neighbouring countries.

From June 1st until the end of August, energy taxes on fuel in Germany were reduced to the EU minimums, as the traffic light coalition government cut the duty on fuel by about 35 cents per litre for petrol and about 17 cents for diesel.

But on September 1st the prices shot back up again.

READ ALSO: Everything that changes in Germany in September 2022

The main reason for the high fuel prices in Germany is the Russian war in Ukraine and the resulting rise in crude oil prices. Prior to the war, Germany had sourced around a third of its oil from the country.

How do fuel prices in Germany compare to other countries?

According to official statistics, motorists in Germany paid an average of €2.07 for a litre of Super E5 petrol and €2.16 for a litre of diesel last Monday. In Denmark, prices were similar at €2.04 for Super E5 and €2.07 for diesel, while in the Netherlands, the second most expensive neighbouring country, they were six and 11 cents below the German average, respectively.

In other neighbouring countries, fuel was significantly cheaper. In Poland, Super E5 petrol cost an average of €1.38 per litre last Monday, and diesel €1.61. In France, the Czech Republic and Luxembourg, too, the average price was at least 30 cents less per litre than in Germany. In Belgium, Super E5 cost €1.69 per litre, diesel €2.02; in Austria, it was €1.74 for Super E5 and €1.90 for diesel.

Social policy expert with the Left Party in the Bundestag, Sören Pellmann, told the Neue Osnabrücker Zeitung that the high fuel prices in Germany were a “result of policy failures of the traffic light coalition”.

Pellmann pointed out that mineral oil companies would rake in almost €40 billion in additional profits this year, and demanded that the federal government “skim off this money and permanently stop the self-enrichment at the expense of commuters”.

In France, he said, fuel prices were around 40 cents lower. “That’s the benchmark for the federal government,” he said.

“It would be a real relief for people in rural areas if the fuel rebate were extended,” the CSU leader told the Neue Osnabrücker Zeitung.

READ ALSO: Fuel in Switzerland: Why Germans are crossing the border to fill up