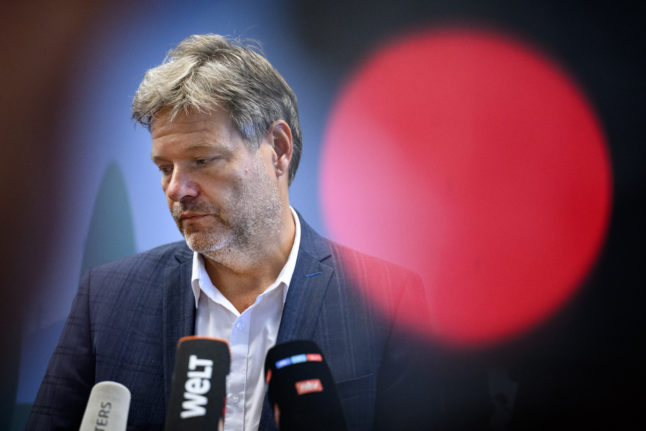 The surcharge will see ordinary people bear some of the soaring costs that gas importers are dealing with as energy prices shoot up because of Russia’s invasion of Ukraine, and Russia’s squeeze on gas exports to Germany.

The levy, to be imposed from October 1st, had been grudgingly accepted as a compromise to help prevent the energy market from collapsing.

But it has sparked outrage after it emerged that the 12 companies who have registered to receive a share of the levy include energy traders like Axpo or Gunvor – both of which have recorded doubling revenues in the the last half of the year.

German Economy and Climate Minister Robert Habeck has promised to change the draft levy law to prevent this from happening.

“We will solve this problem,” Habeck, of the Green party, told German broadcaster ZDF on Sunday.

The correction to the law will be aimed at preventing energy firms from economically benefiting.

Habeck slammed the fact that “companies are taking advantage of it”.

However, he maintained that the gas levy was needed. He said it was “an unpleasant step, an unpleasant decision, but a necessary decision”.

Pressure is building on Habeck to repair the damage immediately.

His coalition partners from the Social Democrats (SPD) and the Free Democrats (FDP) say amendments to the law must be made by Tuesday when a government retreat is set to take place.

“Errors should be eliminated by the cabinet retreat,” FDP parliamentary group leader Christian Dürr told Bild newspaper. He added that the gas levy should “in no way lead to extra profits for companies”.

“We must be careful that government intervention does not make the energy crisis worse,” Dürr warned.

SPD member of parliament Ralf Stegner told Bild that the cabinet retreat in Meseberg, Brandenburg, was “the right place and the right time to renegotiate the gas levy”.

He said that the current plans were “unfair” because they offer “corporations that are not in need and have made millions in profits over the years the opportunity for extra profits”.

Stegner added: “At the same time, it exacerbates social hardship for millions of consumers.”

The Kiel Institute for the World Economy estimates that the levy will send Germany’s already soaring inflation rate up by another 0.9 percentage points.

To help consumers cope, Germany is to temporarily slash the sales tax on gas to seven percent from 19 percent. But that is not expected to fully offset the gas levy and the general rising energy costs.

READ ALSO: What does Germany’s VAT cut mean for you?