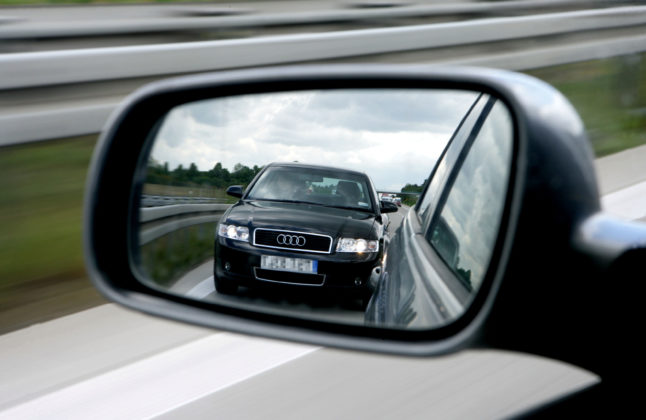 A tailgater can be seen in the wing mirror of a car traveling at on the A12 in Brandenburg. Photo: picture alliance / Patrick Pleul/dpa-Zentralbild/dpa | Patrick Pleul

Giving the Nazi salute – known as der Hitlergruß in German – is illegal in Germany.

The gesture, which consists of stretching the right arm diagonally upwards with a flat hand at eye level, is a criminal offence which is punishable with a jail term from three months to up to five years.

There are some exceptions to this strict law, however, which include demonstrating the salute for the purposes of an artistic performance or for educational reasons.

However much you dislike them, killing wasps is something you should avoid at all costs in Germany.

That’s because wasps are protected by the Federal Nature Conservation Act, which states in Section 39 that it is forbidden to “wantonly disturb them or to capture, injure or kill them without reasonable cause.” 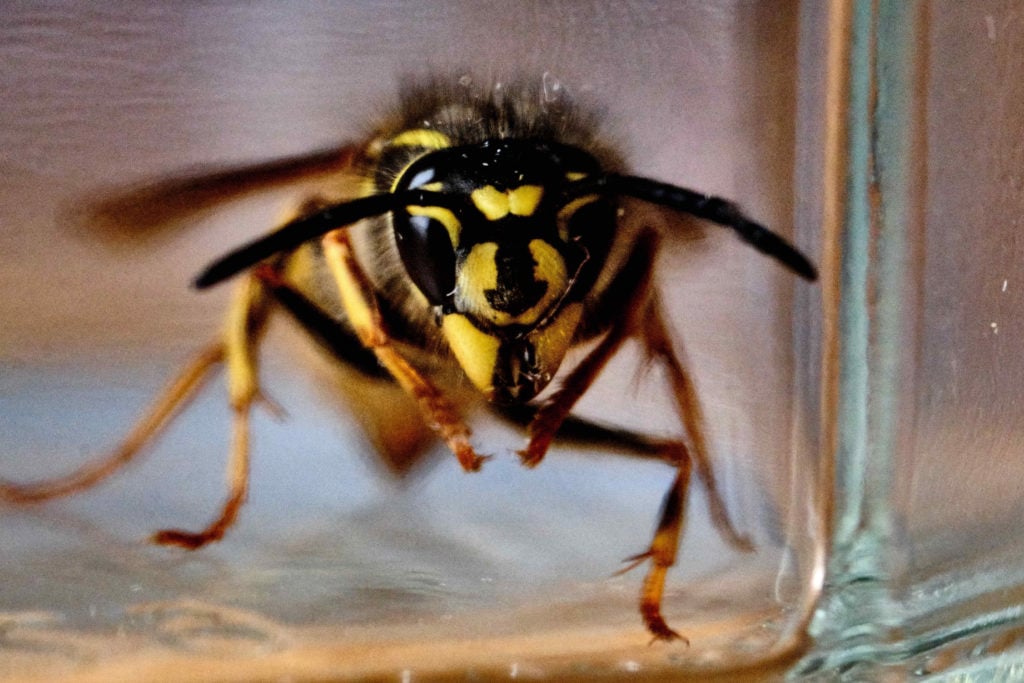 A common wasp looks out of a jam jar in which it was caught to get it out of the house and set it free again. Photo: picture alliance/dpa | Stefan Jaitner

Anyone who gets caught splattering one of the buzzing critters could face a fine of up to €5,000, even for one of the more common varieties of wasps.

READ ALSO: EXPLAINED: How to deal with wasps in Germany

3. Covering your face at a demo

If you are a politically active person who likes to attend demonstrations, this is an important rule to be aware of.

In Germany there is a law called das Vermummungsverbot – a ban on face coverings at demonstrations. The purpose of the law is to ensure that the authorities can identify people in case of criminal behaviour during a protest. 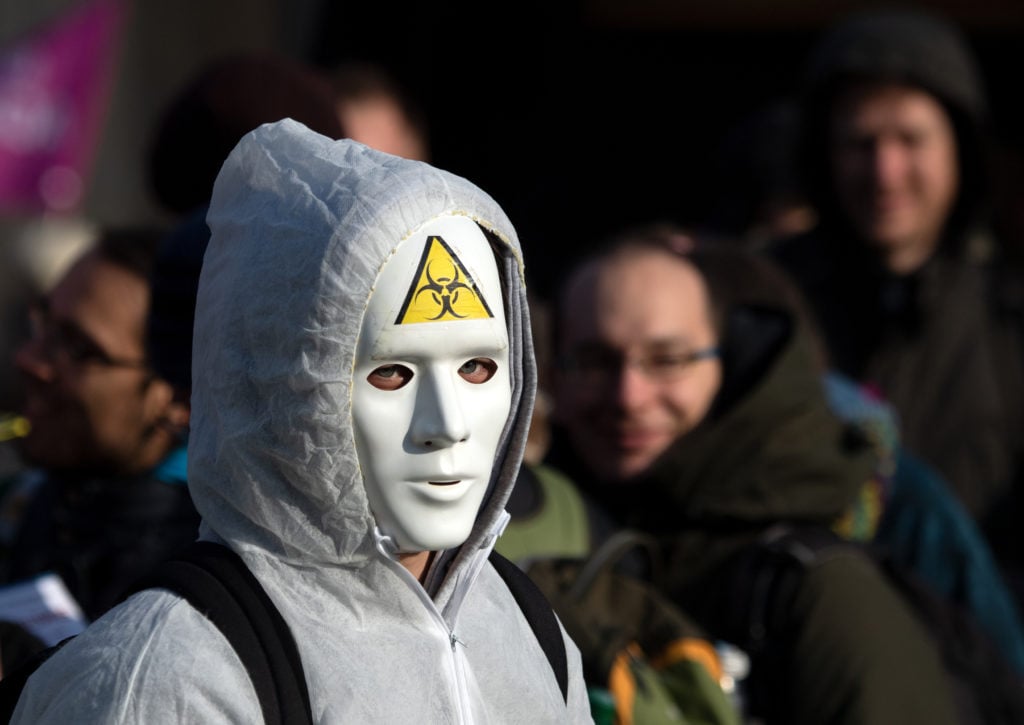 A demonstrator wears a white mask with a sticker with the symbol “biohazardous” in Berlin. Photo: picture alliance/dpa | Ralf Hirschberger

Before you ask, there is an exception to the rule for face masks worn for the purpose of preventing the spread of Covid. The key thing is that the wearer is still identifiable.

4. Doing DIY on a Sunday

If you’ve just bought some shelves you want to put them up before the working week starts again, it’s best you wait until next Saturday.

That’s because the Sonntagsruhe (Sunday rest) principle is so important in Germany, that it’s even written into the constitution.

That means no drilling, hammering, banging, mowing the lawn, hoovering or recycling glass bottles on Sundays.

The rule of thumb here is that the so-called room noise level may not be exceeded in closed rooms and 50 decibels outdoors.

Anyone who disturbs this peace and quiet can be hit with a fine which can amount to a three-digit sum.

In extreme situations and repeated cases, the peace-disruptor could even end up being expelled from their home by their landlord or local authority.

They say that words are cheap, but that’s not the case on the roads in Germany.

Insulting someone during a road traffic interaction is a criminal offence and can land road users with fines of up to €4000. 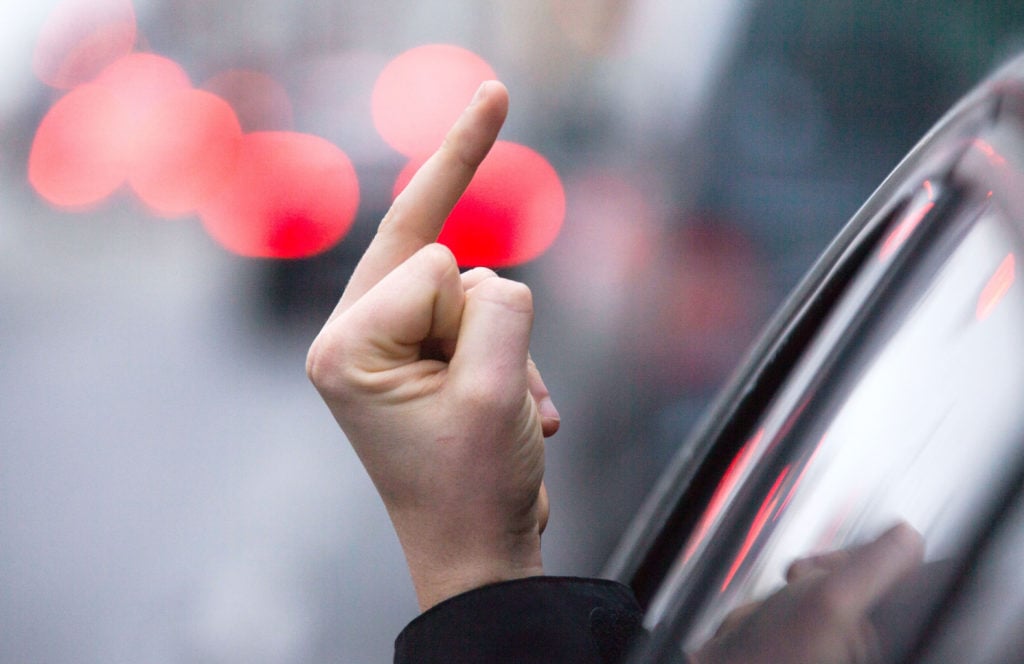 The Bußgeldkatalog (fine catalogue) website has compiled a list of what certain insults can end up costing when said behind the wheel.

Caution is also advised in the case of indirect attacks, saying: “I’d love to call you an a***hole right now” landed one driver a fine of €1,600.

READ ALSO: Driver in Bavaria gets €5,000 fine for giving the finger to speed camera

If you don’t know the difference between the “Sie” and “du” forms in German, now’s the time to catch up.

Though using the “du” form with a German police officer is not directly forbidden, it can be (and often will be) taken as an insult that constitutes a criminal offence under section 185 of the criminal code.

Jaywalking, or als Fußgänger im Straßenverkehr unachtsam sein (being inattentive a pedestrian) as it’s catchily called in German, is an offence in Germany that can land you an on-the-spot fine of €5 to €10.

New drivers could even have their two-year probation period extended if caught crossing the road at a red traffic light.

8. Running out of petrol on the motorway

If you drive in Germany, make sure you don’t go on the Autobahn without enough petrol.

It’s illegal to stop on the highway in Germany without an extremely good reason and failing to put enough fuel in your car isn’t one of them.

Drivers who stop on the Autobahn for this reason for less than 3 minutes face a fine of €35 and €70 for more than 3 minutes, plus a point on their license.

Of course, if your parked car endangers other traffic and leads to an accident, the fines can get a lot more expensive.

READ ALSO: From nudity to sandwiches: The biggest culture shocks for foreigners in Germany

Depending on the state, washing your car in front of your home can land you with a hefty fine in Germany.

While there is no general ban on washing cars on private property, there is the Federal Water Resources Act (das Wasserhaushaltsgesetz) which makes it a punishable offence to contaminate groundwater. 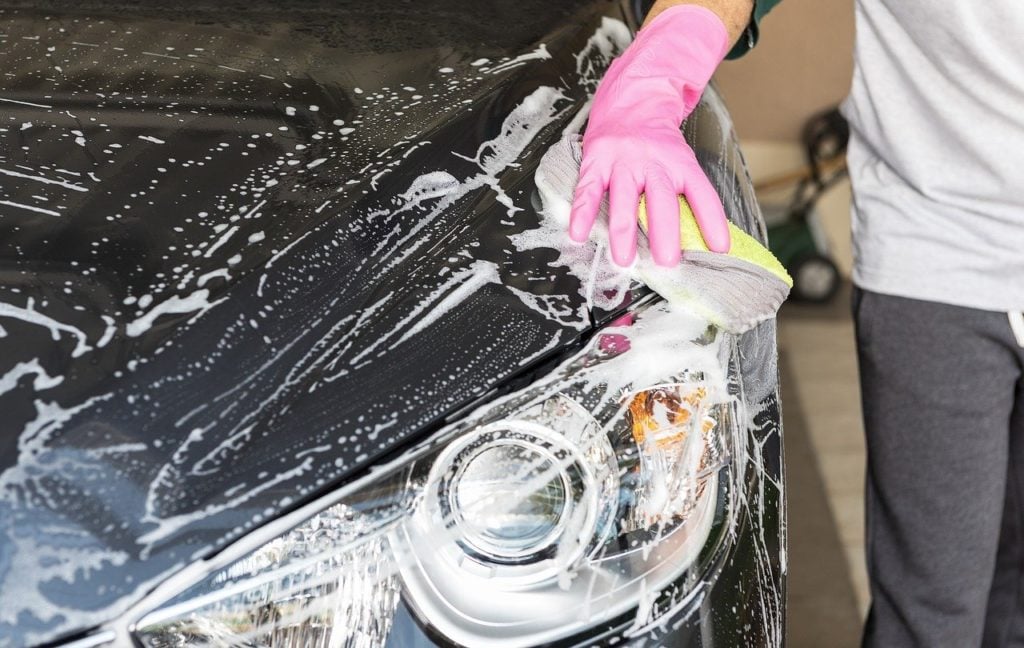 States also have their own bylaws, which often specify more details about washing cars on private property. The states of Baden-Württemberg and North Rhine-Westphalia are particularly strict in this respect and issue fines starting from around €500.

Almost every mobile phone now has a voice recording and video function. But if you make a voice recording of someone in Germany without asking, you could land yourself in big trouble, as it is a criminal offence under Section 201 of the Criminal Code.

Unauthorised recording of the spoken word in non-public speaking situations is punishable regardless of the content of what is said. The law here is so strict, that even the German authorities aren’t allowed to make secret sound or image recordings to investigate a crime. 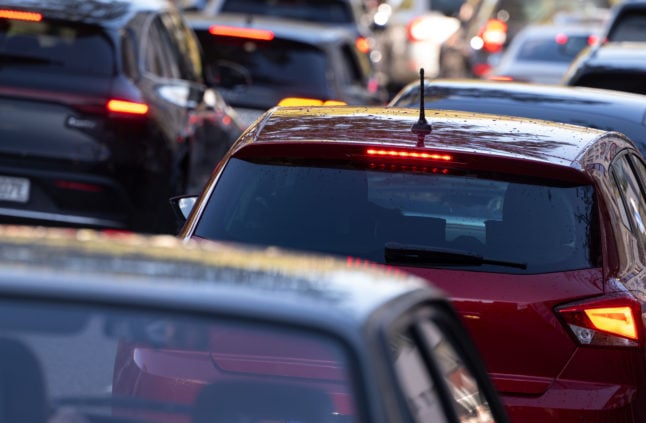 In many ways, Germany is a car lover’s paradise. Not only are some of the world’s biggest car manufacturers based here, but drivers also enjoy numerous rights that they don’t elsewhere, from cheap parking permits to speed-limit-free sections of the Autobahn.

It’s no wonder then that the country has developed a reputation for being somewhat car obsessed. But how true is it really? We take a look at some of the facts.

It’s a topic that’s almost never out of the news, and a debate that has been rumbling on for years: should Germany finally introduce a hard speed limit on sections of its Autobahn?

In German politics, the Green Party has been one of the loudest voices calling for so-called Tempolimit in recent years, arguing that the move would prevent accidents and drastically cut carbon emissions on the motorway. However, the liberal FDP were dead-set against the move when the ironically named traffic-light coalition sat down at the negotiating table last year.

Since Russia’s invasion of Ukraine, it seems that public opinion in Germany has been swinging towards the Greens. When framed as a solidarity measure in an ARD poll, 60 percent of Germans said they would be in favour of a temporary speed limit on the Autobahn, while just 35 percent were against.

Most surprisingly, even Finance Minister Christian Lindner (FDP) – who’s said to be a huge fan of fast cars – has softened his stance on the measure in recent weeks. In an interview on political podcast Lage der Nation, Lindner signalled his readiness to negotiate on the issue.

“I would immediately be prepared to say that we would impose a speed limit in Germany if the nuclear power plants were to run longer,” he told podcast hosts Ulf Buermeyer and Philip Banse.

One of the reasons Germany is so closely associated with cars is the unwavering national pride in its car manufacturers. BMW, Volkswagen, Porsche and Mercedes-Benz are all German brands – and politicians in Germany have often been accused of being in the pockets of these big companies over the years.

Indeed, former chancellor Angela Merkel (CDU) has been branded the “car Chancellor” for her perceived friendliness towards the car industry – even when it interfered with her environmental aims. And there are endless jokes on German satire shows about Christian Lindner supposedly taking his policy ideas from the CEO of Porsche.

However, there’s no denying that car manufacturing plays a significant role in the German economy. In 2021, the sector employed almost 790,000 people and turned over a whopping €410 billion – accounting for 24 percent of domestic industry revenue. Seen from that perspective, it’s understandable that successive governments have wanted to keep these heavyweights on-side. 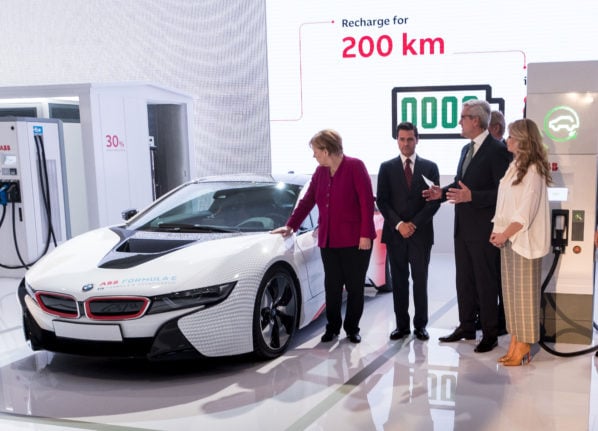 Though driving is clearly close to Germans’ hearts, it may surprise you to know that the Bundesrepublik is by no means at the top of the ranks in Europe when it comes to car ownership.

In a ranking of motor vehicles per capita in the EU, Germany actually ends up somewhere in the lower-middle, with a total of 14 member states – including France, Portugal, Italy and Finland – boasting more cars, vans and freight vehicles per person. (In case you’re interested, the Italian micro-state of San Marino topped this particular chart.)

However, when you look at the number of motor vehicles in total, rather than just per capita, the stats paint a slightly different story. While Italy and France both have around 45 million motor vehicles in the country, there are 52 million of them in Germany.

Of course, that’s not to say that the German love affair with driving is entirely a myth. A recent study found that the average German spends a whopping €233 per month on their Auto, which adds up to almost €2,800 per year, compared to just €33 per month on buses and trains.

That’s not including the outlay for a car in the first place, which can cost well into the tens of thousands.

The seemingly unshakeable bond between Germans and their cars has become the subject of heated debate recently as the government tries to encourage people to switch to more climate-friendly options. Some argue that people have become far too attached to convenience and need to make lifestyle changes, while others say the transport network in Germany just isn’t good enough to support this. 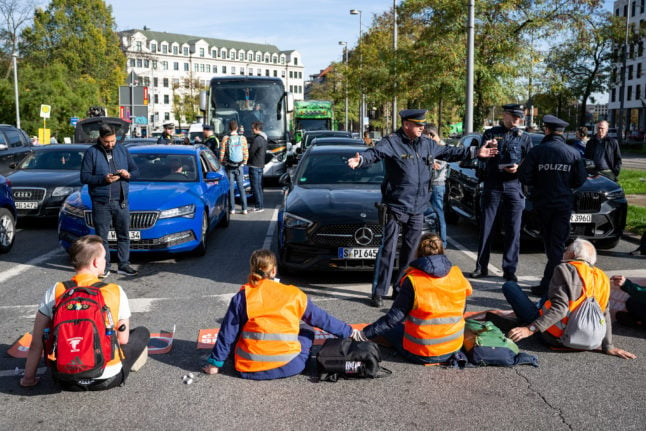 The latest front for this battle is Berlin, where the Senate has recently been forced to re-open a busy street to cars after a court ruled that there was no valid legal basis to redirect traffic. Friedrichstraße had originally been blocked off the motor vehicles as part of a traffic trial in 2020 – but the cycle paths and pedestrian walkways had simply remained in place ever since.

As the signage redirecting vehicles is removed from Friedrichstraße, it seems that those who wanted cars to return to the busy thoroughfare have won the battle. But with the Senate vowing to push ahead with plans to pedestrianise the street in the long-term, they may not have won the war.

READ ALSO: How Berlin Friedrichstraße ended up at the centre of the car-free debate 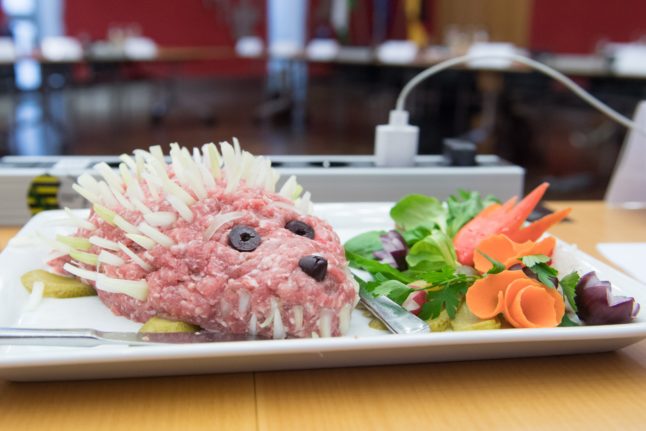 GERMANY EXPLAINED
What is ‘crystal Mett’ and why is Germany talking about it?
Url copied to clipboard!