Steinmeier travelled to the northern city of Rostock to commemorate the 1992 rampage when thousands of bystanders applauded as a marauding mob flung stones and petrol bombs at a housing block for asylum seekers.

He said Germany had failed to snuff out hatred and radicalism in the intervening years, as political leaders warn of potential militancy this winter linked to high energy prices, inflation and resumed pandemic measures.

“The risk that the trail of violence hasn’t ended is high,” Steinmeier told the ceremony.

“Particularly now at a time that puts us to the test like nothing in the last decades — a time that demands a lot of us, in which what’s normal is thrown into doubt and restrictions loom.”

He said Germany had seen successive “waves” of right-wing extremism, some of it deadly, in the last three decades, noting that opposition to the 2015 refugee influx and coronavirus measures had been harnessed by radical groups.

As the country faces a winter of soaring energy bills due to the Ukraine war along with an anticipated sixth wave of the pandemic, far-right as well as extreme-left activists have announced anti-government protests.

In Rostock in 1992, the targetted building was occupied by Vietnamese migrant workers who had to be evacuated from the burning edifice amid shocking scenes in a country still in the throes of reunifying.

Days of violence in the Lichtenhagen district saw several thousand people chanting “Germany for Germans, Foreigners Out!” in ugly images not seen in Germany since the Nazi era.

Steinmeier called the riot a national “disgrace”, saying it was a “miracle” no one was killed in the five-day siege.

Surrounded by survivors of the riot and community leaders, Steinmeier said the scenes were “seared” on the national memory.

“But we can only guess your mortal fear, your sense of abandonment in those hours,” he said.

Steinmeier acknowledged multiple failings including ill-equipped police and a complacent political class that refused to see mounting radicalism in the depressed ex-communist east. 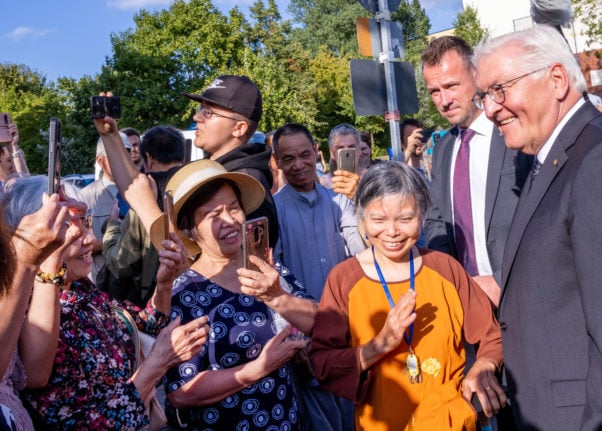 German President Frank-Walter Steinmeier is greeted by local residents after his visit to a Buddhist-Vietnamese temple in the Lichtenhagen district of Rostock. Photo: picture alliance/dpa | Jens Büttner

“The violence from back then, that trail of far-right terror, is unfortunately still with us,” he said.

The commemorations were marred earlier when a 13-year-old boy allegedly flashed the outlawed straight-armed Hitler salute behind a reporter while he was on camera. Police said they had identified the juvenile suspect.

There were some 33,900 people in the right-wing extremist spectrum in Germany in 2021, according to a report presented by the BfV federal domestic intelligence agency in June — up from 33,300 in 2020.