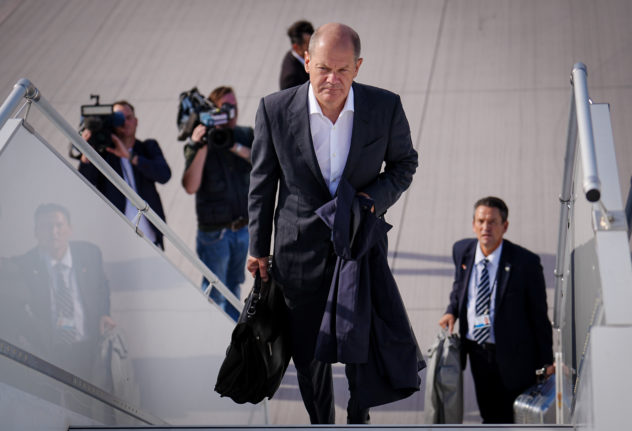 Those who have flown in and out of Germany will be aware that there is a requirement to wear a medical face mask on flights as part of German Covid rules – despite the EU recommending that masks no longer need to be mandatory.

But a heated debated has broken out after Chancellor Olaf Scholz and Economy and Climate Minister Robert Habeck, who is also vice-Chancellor, were photographed without masks on a recent trip.

Earlier this week the pair flew out to discuss the energy crisis with the Canadian government as Germany tries to end dependence on Russian oil and gas.

The tweet below contains clips from the government flight, and includes footage of Habeck talking with journalists – with no sign of anyone wearing a mask.

The tweet quotes the strict rules, which state: “According to the Federal Infection Protection Act, the mask requirement on airplanes continues to apply on all domestic German routes and on flights that take off or land in Germany.”

However, a government spokesman said that no rules had been broken – because the mask obligation does not apply to government planes.

Furthermore, all passengers have to take a PCR test at least 24 hours before departure.

The government spokesman said: “There is no mask requirement on Luftwaffe (German Air Force) flights. All participants in the trip must present a current negative PCR test before taking off. This ensures a high level of protection.”

According to a Luftwaffe spokesman, passengers tested for Covid are exempt from wearing a mask when flying in government aircraft. The spokesman said wearing a mask is, however, recommended.

In the face of criticism, Chancellor Scholz referred to the “clear rules” for government flights during a press conference in Newfoundland on Tuesday.

But the issue has reignited the controversial debate on Germany’s mask restrictions that has been running for some time.

On Wednesday the Cabinet was set to discuss the country’s Covid plans for the autumn and winter.

They include proposals for Covid masks to remain mandatory on planes leaving or coming to Germany, on long-distance trains as well as the option for states to order a mask obligation on public transport.

Now calls are growing louder for the government to drop the plane mask requirement – and make it voluntary instead.

The coalition government – made up of the Social Democrats (SPD), Greens and the Free Democrats (FDP) – is split on continuing with Covid mask rules.

The pro-business FDP, for instance, has consistently pushed to drop a general mask requirement on transport.

“The pictures from the government plane leave the impression of elitist double standards for many people in the country,” he said, adding that he thought Germany needed to immediately end the mask requirement on planes and trains.

“We are now alone in Europe on this path,” he added. 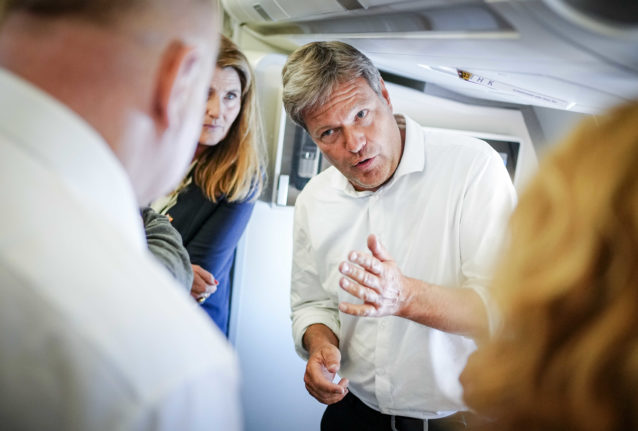 Economy Minister Robert Habeck talks to journalists traveling with him on an Air Force Airbus A340 during the flight from Berlin to Montreal. Photo: picture alliance/dpa | Kay Nietfeld

The footage has also played into the hands of the opposition who took a swipe at the government.

Saxony-Anhalt’s economics minister Sven Schulze, of the Christian Democrats (CDU) told Bild newspaper: “Regardless of whether it’s a school bus or a government plane, a mask requirement in our means of transport must either apply to everyone equally or to no one.

“The pictures from the chancellor’s plane rightly cause disbelief.”

CDU health expert Tino Sorge added: “There is no room for double standards in the fight against corona. Without equal rules for all it does not work. If there’s already a mask requirement, it must apply to all travellers – especially top politicians who serve as role models.”

The Local’s columnist Brian Melican also called out the ministers in a tweet.

One for that small, but not wholly neglible sub-set of my followers who are @vizcomic readers and have a knowledge of German: "As ever, it's one rule for…" pic.twitter.com/AgIjAbqnbt

FDP parliamentary group leader Christian Dürr said the mask requirement in airplanes would be looked at in more detail in the coalition, and ministers will “examine where there is a need for improvement”.