EXPLAINED: The German cities where rents are rising fastest this year

People searching for a flat in German cities including Hamburg, Cologne and Berlin are in for a nasty surprise as rents are going up significantly, according to a recent study.

Real estate platform ImmoScout24's recent 'WohnBarometer' shows the development of asking rents for the second quarter of 2022 in Germany as a whole, and the seven largest city areas.

In Berlin, Frankfurt am Main and Stuttgart, asking rents for new-build flats have risen above €15 per square metre.

What's the picture across Germany?

For the second quarter of 2022, the WohnBarometer shows that the asking prices for rental flats across Germany have risen significantly more than in previous quarters.

Meanwhile, demand for rental apartments shot upwards by 48 percent in the second quarter of 2022.

Where is the situation particularly bad for existing rentals?

Those eyeing up big cities as a place they want to settle in face a particularly hard time.

Hamburg recorded the highest price dynamics in the area of existing rental flats older than two years in the second quarter - but it remains in fourth place in the rental price comparison of the seven largest German cities.

On average, the rent level in the Hanseatic city was €12.22 per square metre in the second quarter of this year. A rental flat with 70 square metres costs an average of €855.40 per month 'cold' - before other costs - Nebenkosten - are added on. 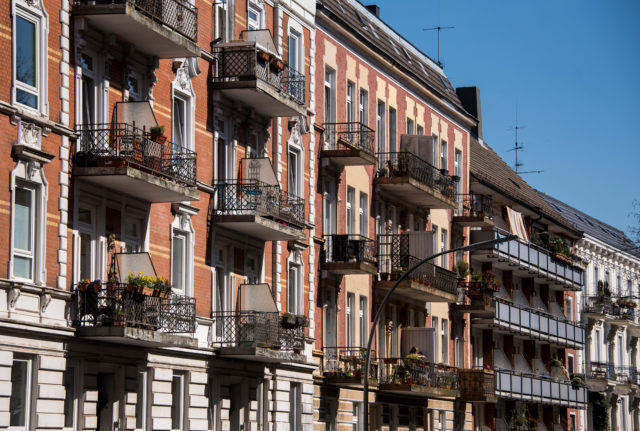 The real estate portal expects rents for existing properties in Hamburg to rise by nine percent this year alone. That would be two percentage points more than the inflation rate expected by the Bundesbank for 2022.

And in a city with a home ownership rate of 21 percent, this affects many of the 1.85 million residents.

From the first to the second quarter of 2022, asking rents in flat ads in Hamburg have risen by five percent.

This is by far the highest value in Germany's seven largest cities. Cologne achieved the second highest increase with 3.7 percent, while rents in Stuttgart fell by 0.7 percent.

In Berlin, asking rents for existing flats rose by just 1.4 percent, but broke the €11 per-square-metre mark.

Berlin nevertheless remains one of the cheapest of the large cities in Germany. Only Düsseldorf, at €10.81 per square metre on average, is lower. Cologne is the third least expensive place to rent with an average of €11.58 per square metre, according to asking prices for existing properties. 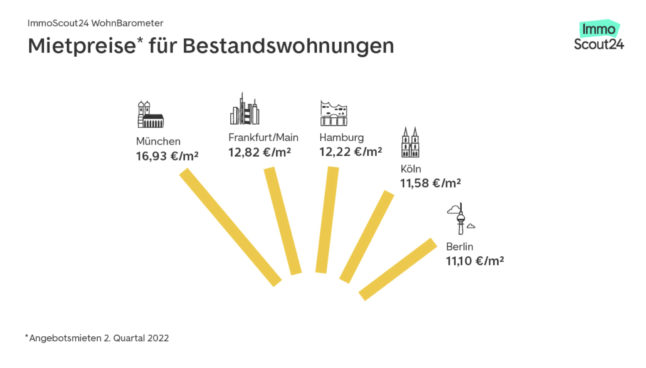 Munich remains the most expensive city for renting with an average price per square metre of €16.93 per square metre. With a decrease of 0.7 percent for existing rental flats to €12.26 per square metre, Stuttgart was the only city to record a slight price decline in rents compared to the first quarter.

What about new build flats?

In the second quarter of 2022, Berlin recorded the largest price increase among the cities for new flats for rent, with an increase of 4.5 percent. These were offered in new lettings on ImmoScout for an average of €15.37 per square metre, exceeding the threshold of €15 per square metre.

In the German capital, the average monthly 'cold rent' for a new flat with 70 square metres is €1,075.90. Berlin is now above the level of Düsseldorf, Hamburg, Frankfurt am Main and Stuttgart. 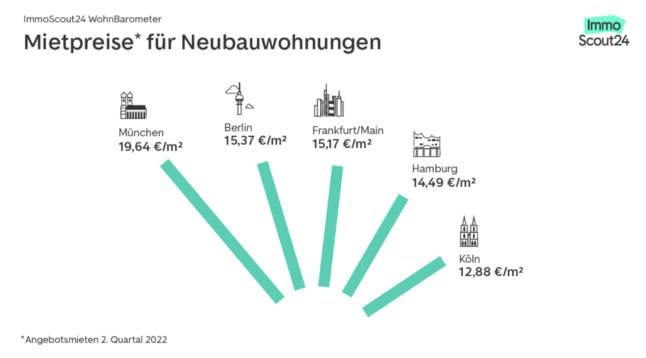 How is demand affecting the situation?

Experts say the dynamics are changing on the rental and property markets in Germany.

"Due to the rise in interest rates, demand has shifted from buying properties to renting. As a result, rent-seekers now face even more competition when looking for a flat."

What will happen in future?

It doesn't look like the situation will ease off this year. Experts predict that by the end of 2022 in Hamburg, for instance, the price increase for existing flats will be nine percent - the highest in Germany.

In Berlin, by the end of the year, rents for existing apartments are expected to rise by 5 percent overall, and in Cologne and Stuttgart, 6 percent.

Rent including other costs - (die) Warmmiete