'€10-€15 more for groceries': How price hikes are hitting consumers in Germany

Consumer prices are rising in Germany - and people are noticing it in their wallets. In May, inflation rose by nearly 8 percent year-on-year, the highest level since the country's reunification in 1990. First, it was the pandemic and the resulting disruption of global supply chains that pushed up prices, now, it is Russia’s invasion of Ukraine that is driving energy and food prices to record high levels.

Olaf Scholz's coalition government launched a €30 billion plan to help German consumers, especially the most vulnerable. The measures included the €9 monthly ticket over summer; fuel tax cuts; energy subsidies; and a one-off €300 payout for all taxpayers, plus a €100 ‘Kinderbonus’ for children.

But while the measures provided temporary relief - in June inflation fell to 7.6 percent - experts fear another surge is around the corner. The numbers could get significantly worse in the coming months when some of the measures end and Germany will face the winter with a reduced amount of Russian gas - or none at all.

People living in Germany are feeling the pinch.

Unlike in Argentina, where consumers are used to offers and different forms of financing to cover themselves against inflation, Nicolás says he has no strategy and has not reduced his consumption because of the rising prices, although it is impacting him. "You don't need to pay in instalments (for items), but you do feel the difference. You save less," he says.

Federico, another Argentina native who has been living in Germany for more than 10 years, agrees.

"It's not that you have problems making ends meet, but that you save a little less," he says. "Or if you have to make a big purchase, you might think about it a little bit more."

He says everyday food products in Berlin have also noticeably gone up.

"The most classic thing - to buy a kebab which is something everyone eats - you can see how much it has increased," he adds.

"There is a lot of advertising on TV and radio showing you ways to save, and years ago there was no advertising or products with so many promos. Now, this has become more visible, as there is a much greater variety of bargains and people tend to go after that a little bit more than they used to." 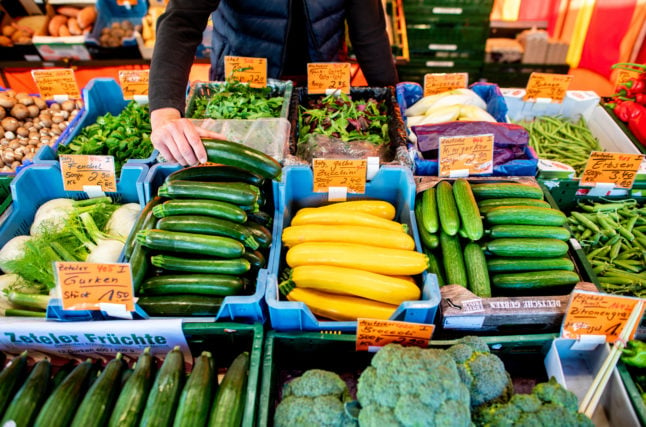 Fruit and veg being sold at a market in Oldenburg. Photo: picture alliance/dpa | Hauke-Christian Dittrich

Chancellor Scholz has promised more measures in the coming months to cushion the burden, especially on lower-income families. The Chancellor plans to meet with employers, trade unions and the Bundesbank team in September.

Bundesbank President, Joachim Nagel, said recently that there is a risk of inflation remaining high in the medium term, and the German central bank is forecasting an average rate above 7 percent for 2022.

"For this year, we think that we can really manage the inflation headwinds we see on the energy side but also on the salary side," Bettina Orlopp, CFO of Commerzbank told Bloomberg TV.  "Next years - 2023, 2024 - the story will be different, becoming more difficult”, she said.

"The inflation we are experiencing in Germany at the moment, and in the euro area as a whole, is not inflation in the real sense. What we have are price shocks", she tells The Local. "What really makes an inflationary process is that wages and prices rise, and then you get persistent inflation.

"We are not at that stage. What we are really seeing instead is that the energy price hikes and the increase in food prices are pushing up prices."

READ ALSO: When will Germany's rising cost of living slow down?

Tober adds that there are assistance measures which make a difference.

"The government has put in place several transfer payments to households, especially low-income households, and other measures that reduce the burden of inflation," Tober says.

She expects price rises to come down "substantially" next year, provided the war in Ukraine does not escalate.

However, Tober says: "If we have a gas embargo and no more gas from Russia, we will have another jump in energy prices, and then inflation will stay high next year as well. And then we have the problem that there may be second-round effects, meaning wage increases might be excessive and then will have persistent inflation."

The expert from IMK says that rising prices are especially affecting lower-income households, who must "cut back on other expenses to pay for food and energy" because they tend to have fewer savings to fall back on.

"But low-income households usually, in Germany at least, they don't have a positive savings rate - that means they've already spent all of their money or most of it - and have very little wealth, so what they have to do is actually reduce consumption to deal with the current [price] shocks."

Indeed, June retail sales plunged 8.8 percent year-on-year, the biggest drop since 1994, according to Destatis. Non-essential items such as furniture, household appliances, clothing and shoes were the hardest hit.

On the other hand, to avoid passing on cost increases to customers and remain competitive, several companies are maintaining prices (or raising them at a very low rate) but reducing the content of their products, warned Verbrauchenzentrale Hamburg, a consumer advice centre. These are hidden price increases, generally referred to as 'shrinkflation'.

With an interest rate of just 0.5 percent, credit or financing purchases in instalments might seem an attractive option to protect from inflation.  However, Verbrauchenzentrale Nordrhein Westfalen, the consumer protection association in the state of North Rhine-Westphalia, says that there hasn't been, at the moment at least, "increasing demand in our debt counselling service as a result of the current inflation, although we notice ongoing concerns about the price increases”.

"Normally excessive debts and consumer insolvency are not seen immediately but with a time gap -they follow a crisis," the agency told The Local. "Therefore, it is just possible that in the end, we will see more consumer insolvencies due to these general price increases."