Bürgergeld: What to know about Germany's unemployment benefits shake-up

The German Bundestag is poised to get rid of the controversial long-term unemployment benefit Hartz IV and replace it with the so-called Bürgergeld. Here's what we know so far.

The German Bundestag starts debating Thursday on a big shake-up of unemployment support from next year.

Parliamentarians are considering a proposal from Labour Minister Hubertus Heil, of the Social Democrats (SPD), to reform the controversial Hartz IV unemployment benefit or Arbeitslosengeld II - a programme for the long-term unemployed that the SPD themselves came up with in 2002.

The term Hartz IV has long been a major problem for large parts of the SPD. Many people associate the reforms passed in 2005 under Chancellor Gerhard Schröder to be at odds with the Social Democrat's philosophy of a caring welfare state.

Here's a look at the draft plans, what they mean, and the amount of support planned.

The aim of Bürgergeld will be to reform the system to make it fairer to claimants, meaning people will be treated less harshly than under Hartz IV. It will be given to all those who currently receive Unemployment Benefit II or Hartz IV - around 3.5 million people in Germany.

Job centres are to be more generous in dealing with benefit recipients, so that the unemployed can focus on getting back into the labour market as quickly as possible. This means a recipient might be encouraged to take the time to finish an apprenticeship in order to qualify for better paying work, for example.

The government's proposal provides for an increased rate of support of €502 per month for single people, up from the current €449. Partnered people would receive €451. Benefits would also be available for unemployed people with children, with €420 provided for a child aged 14-17, €348 for 6-13 year-olds, and €318 for children aged 5 and younger. Parents with a teenager working a part-time job earning up to €520 a month would also no longer see their benefits reduced.

In the first two years of receiving Bürgergeld, benefit recipients would also be allowed to stay in their homes without worry - these will not be included in the calculations of what people can receive.

Furthermore, assets of up to €60,000 would not be touched by the state. The concern of many people that they would have to give up their homes or use up their savings if they were unemployed for a longer period of time could therefore be eliminated - at least for the first two years. After that, as before, there could be checks on whether people's housing situation is suitable (or if it is deemed too big). After the first two years, assets of up to €15,000 would also not be touched by the state. 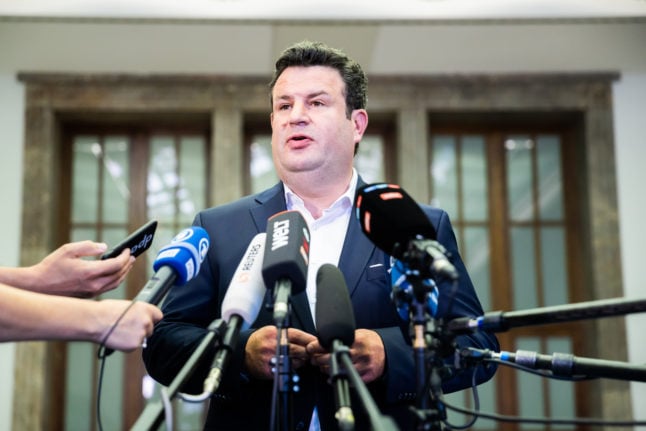 The new system will limit the sanctions to some extent. Heil's proposal provides for a new regulation which would mean sanctions could not be introduced during a six-month 'period of trust' from the time of receipt of Bürgergeld. Payments would not be docked during this period.

Only those who do not cooperate with the job centre at all will have to fear negative consequences, the government says. "For people who chronically do not keep appointments, there can still be legal consequences," said Heil.

More opportunities and incentives for further education are also part of Heil's proposal for reforming the unemployment support system. Among other factors, people will be given more time to acquire a vocational qualification: three years instead of the previous two, under the plans.

READ ALSO: Germany's plans to ditch sanctions for the unemployed

So far, the Free Democrats reject a change in the calculation formula for monthly payments. "Instead, we have to improve the additional income possibilities," FDP leader and Finance Minister Christian Lindner told RTL. The pro-business FDP also isn't happy with easing the sanctions situation.

Yasmin Fahimi, chairperson of the German Federation of Trade Unions, said Bürgergeld had "what it takes to largely overcome the old Hartz IV system".

READ ALSO: Why are Germany's Hartz IV benefits so controversial?

Heil has so far remained vague about how Bürgergeld would be funded.

The government has been hemorrhaging money in the past years due to the Covid pandemic, rising inflation and subsequent measures to help the population and as a result of Russia's war on Ukraine.

If the Bundestag and Bundesrat pass the reform soon according to plan, it will come into force on January 1st 2023.