A heat warning was in place in large parts of Germany on Wednesday, while storms and hailstones were forecast in some regions.

Temperatures in the east of Germany were set to soar up to 40C, the German Weather Service (DWD) said.

It was slightly less warmer in western regions, with highs of around 34C expected.

It comes after Tuesday became the hottest day of the year so far in Germany. The mercury hovered around 40C in some places. At the weather station in Duisburg-Baerl, North Rhine-Westphalia, a high of 39.5C was measured.

READ ALSO: Germany braces for hottest day of the year

Emsdetten in North Rhine-Westphalia is said to have even cracked the 40C mark, according to the ARD weather centre.

However, the overall heat record for Germany has not yet been broken - a sweltering 41.2C was measured on July 25th 2019 in Duisburg and Tönisvorst on the Lower Rhine near Krefeld.

The below tweet from the German Weather Service highlights some of the hottest temperatures on Tuesday this week.

As the heat shifted eastwards, some places were set to be hit by thunderstorms, torrential rain and hailstones.

In a tweet DWD said there was widespread heat, except in the west and southwest.

"On the other hand, there will be thunderstorms later with the potential for local severe weather due to heavy rain, gusts of wind (around 100 km/h) and large hail!" the weather service added.

As the map below shows, a heat warning (in purple) was in place for most of Germany on Wednesday. The areas coloured red show isolated storm warnings. 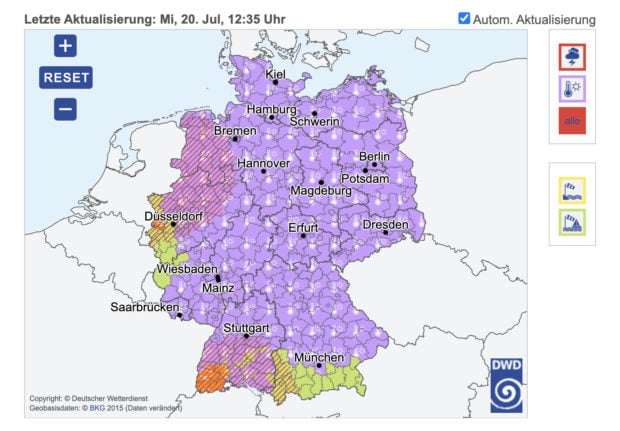 According to forecasts, temperatures will drop slightly in the following days and there could be some more storms and rain.