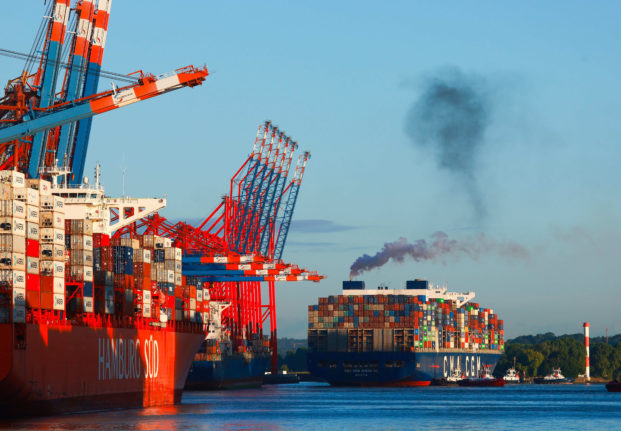 A container ship docks at a terminal at the Waltershofer Port, Hamburg. There is still no agreement in sight in the conflict over the pay of workers at large German North Sea ports. The trade union Verdi has called a 48-hour strike. Photo: picture alliance/dpa | Christian Charisius

Verdi union said workers walked out in all major German North Sea ports, with the action set to last until Saturday.

At 6am on Thursday employees on the early shift in Bremen and Bremerhaven stopped work, Verdi district manager of Bremen-Nordniedersachsen, Markus Westermann, said.

The work stoppages are planned until 6am on Saturday. A strike has also begun at the port of Hamburg, said Stephan Gastmeier, trade union secretary in the transport and maritime department at Verdi Hamburg.

The industrial action is because no agreement over pay has been reached with the Central Association of German Seaport Operators (ZDS) following the latest meeting on Wednesday, union bosses said.

Negotiations are currently suspended. The union is negotiating for about 12,000 workers in 58 companies in Hamburg, Lower Saxony and Bremen who are covered by collective agreements. Dockworkers have already left ship and cargo handling at a standstill twice in June, most recently for 24 hours on June 23rd.

According to Verdi negotiator Maya Schwiegershausen-Güth, the latest 48-hour ‘warning strikes’ will affect Emden, Wilhelmshaven and Brake, as well as Hamburg, which is the largest seaport in Germany and third largest in Europe.

Like many unions across Europe, they are fighting for wage increases amid extreme inflation rises.

Verdi is demanding an increase in wages of €1.20 per hour for employees as well as compensation for inflation amounting to 7.4 percent for the duration of the collective agreement which is 12 months. The union also wants to push through an increase in the annual allowance for container operations by €1,200.

The impact of the strike on the handling of container and cargo ships is likely to be considerable and bring the loading and unloading of ships largely to a standstill.

This will further aggravate the already tense situation with ship congestion on the North Sea, and the processes at the quaysides are likely to get even more out of step.

Container ships have been piling up in the North Sea, while ports are becoming storage areas.

ZDS negotiator Ulrike Riedel called the strike “irresponsible” in view of the disrupted supply chains and said it was to the detriment of consumers and businesses.

Due to the Covid pandemic, the global traffic of container and cargo ships has been in chaos for several months.

According to recent calculations by the Kiel Institute for the World Economy, more than two percent of global freight capacity is stuck in the North Sea. There are currently around 20 cargo shops waiting in the German bay area for clearance, most of them bound for Hamburg.

The agreement “includes a comprehensive peace obligation until 30th June 2023”, with strikes “excluded during this period”, Lufthansa said in a statement.

The airline and the pilots’ union Cockpit signed an accord in early September to avoid planned industrial action.

The deal sees basic pay for pilots at Lufthansa and its cargo subsidiary climb by 980 euros ($993) in two equal steps, once retroactively for August 2022 and again in April 2023.

A rookie copilot will see wages increase by 20 percent under the agreed plan, while the raise for a seasoned pilot will be equivalent to 5.5 percent, according to Lufthansa.

The two sides “will continue their constructive exchange on various topics” while the deal is in place, Lufthansa said.

Beyond the pay agreement, the union was happy to “take a step towards a durable partnership” with the accord, Cockpit boss Marcel Groels said.

During the dispute, pilots walked out for 24 hours at the beginning of September, leading Lufthansa to cancel almost all its flights out of Frankfurt and Munich, its two German hubs.

Lufthansa reached a pay deal with ground staff in early August, after the dispute led to strike action in the peak European holiday season.