Since the €9 monthly ticket was introduced, the volume of rail travel has increased significantly, according to an analysis by Germany's Federal Statistical Office (Destatis).

Around 21 million people bought the travel deal for June.

Major uptick in journeys in first week of June

People in Germany took the train particularly frequently in the first week of June. The volume of journeys between 30 and 300 kilometres was 56 percent higher on average at this time compared to the same period in 2019.

Over the course of June, the gap to the pre-crisis level decreased again somewhat. Destatis said this was "possibly due to the congestion of trains on certain routes and the corresponding reporting on this".

Researchers took the effect of public holidays in the first half of June into account by comparing them with the 2019 period.

Experts said the effect of the €9 ticket on shorter rail journeys was particularly pronounced.

"When differentiating the movements in rail transport according to distances travelled, it becomes clear that since the introduction of the €9 ticket, an increase in train journeys of less than 300 kilometres in particular was observed," Destatis said. 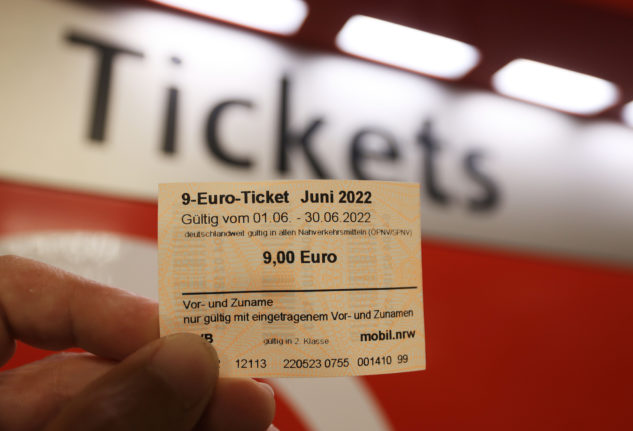 When the distances are further subdivided, train journeys on short routes (30 to 100 kilometres) were roughly at the pre-pandemic level in the last week of May - but in the first week of June they were 58 percent above it.

The €9 ticket can be used on many regional trains that cover distances of up to 300 kilometres. For distances of less than 30 kilometres, Destatis said it wasn't possible to reliably identify the mode of transport on the basis of the anonymous cell phone mobility data they analysed.

Researchers were able to observe a particular rise in train journeys at the weekends. In April and May, the number of train journeys on routes over 30 kilometres was still just below the pre-crisis level on Mondays to Fridays, but from June onwards it was 36 percent higher on average.

At weekends, train journeys on an average Saturday were 18 percent higher in May, then jumped to 83 percent in June. On Sundays, there was an increase of 61 percent in June.

People who get the ticket can use buses, trains and trams nationwide between June and August for just €9 per month. The ticket is valid for all local and regional transport - i.e. all public transport apart from long-distance trains such as those operated by Deutsche Bahn or Flixtrain.

The German government is considering how to keep up the momentum of the €9 ticket after the offer expires at the end of August. The idea of a 'Klimaticket' is being considered, along with other proposals.

What about the effect on other transport?

According to Destatis, road transport activity in the year to date has mostly been slightly above the pre-crisis level of 2019. But since the introduction of the €9 ticket, there has been a "moderate decline".

Trips over 300 kilometres by road have been mostly below levels in comparable periods of 2019 so far this year: just under 1 percent lower in the last week of May, and 11 percent lower by the end of June. Shorter trips between 30 and 100 kilometres decreased moderately.

Meanwhile, Destatis said travel on domestic flights in Germany has increased again this year, but was 31 percent lower at the beginning of June 2022 than in the same period before the pandemic.